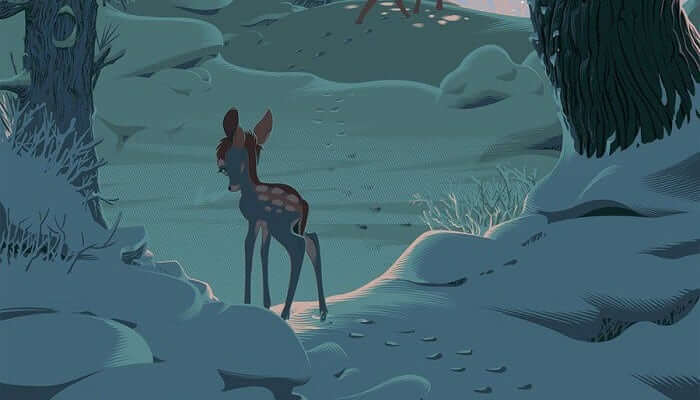 “Never Grow Up: A Disney Art Show” was previously announced for the Mondo Art Gallery in Austin, Texas. The announcement came with a preview of three posters that would be available at the show: Aladdin, 101 Dalmatians, and Big Hero 6.

Now, many more posters have been revealed. Laurent Durieux’s “Bambi” and Becky Cloonan’s “Fantasia” are among them. If “Bambi” didn’t already tug at your heartstrings enough, the poster perfectly captures the sadness of young Bambi alone in the woods. Up ahead, adult Bambi gazes off into the horizon. Take a look at some of the other works that will be on display: “Alice in Wonderland” (Back) “Snow White and the Seven Dwarfs” “The Fox and the Hound” The gallery show, a collaboration with Cyclops Print Works, opens on April 28. In addition to these posters, you can buy prints for “Snow White,” “Lilo and Stitch,” and “Pinocchio,” among others.