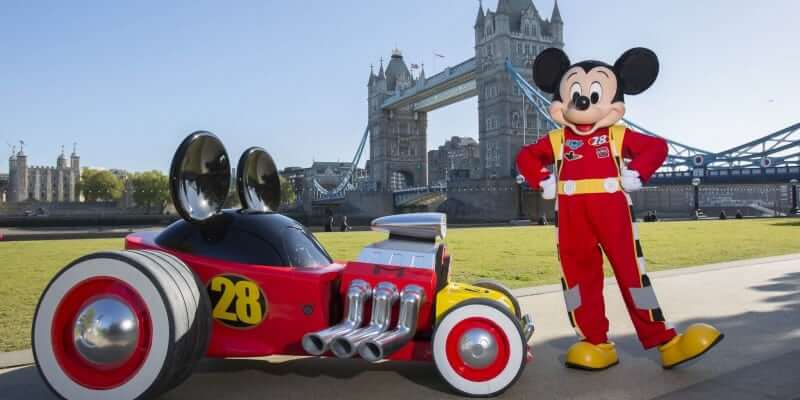 If you were in London this past week then you may have actually seen Mickey Mouse driving around town in his brand new Roadster Racer – The Hot Doggin Hot Rod. Mickey has been cruising various areas in London in promotion of his upcoming animated series, “Mickey and the Roadster.” Some specific areas where you may have spotted Mickey include Southbank, Cross taxi rank and a zebra crossing.

WATCH – MICKEY AND THE ROADSTER RACER IN LONDON:

The show originally made its television debut this April on Disney Junior, and currently airs on Wednesdays at 5pm. The series is also available on DisneyLife, Disney’s on-demand service. The Hot Doggin Hot Rod was designed over the course of eight weeks by a team of eight engineers and experts. The car was created in celebration of the new show that follows Mickey and The Roadster with his main pals – Minnie Mouse, Donald Duck, Daisy Duck, Goofy and Pluto as they race across the globe on action-packed adventures. The Roadster Racer model measures 2.4 meters in length, and features a ‘28’ on the side, which represents the year in which Mickey Mouse first appeared onscreen in ‘Steamboat Willie’ in 1928, 90 years ago next year.

WATCH – THE MAKING OF THE ROADSTER RACER