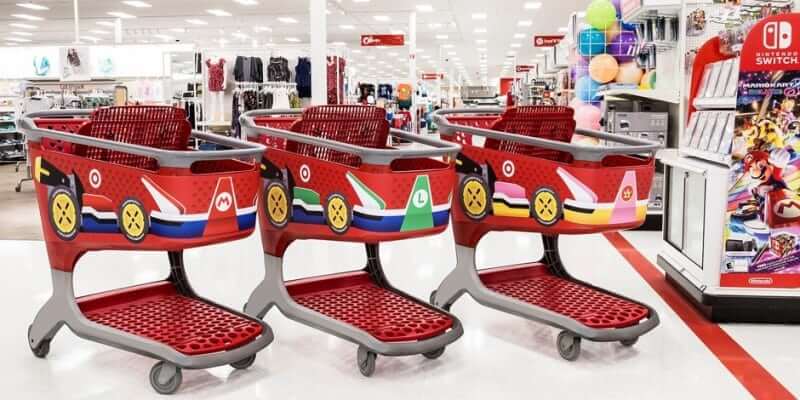 Move over monorail wraps, shopping carts are the new overlay excitement.  For the first time ever, Target stores are getting the “Super Target Kart” treatment in honor of the April 28 Nintendo Switch release of Mario Kart 8.

Super Target Karts are just the beginning.  The store is going into full-on Mario mode.  This limited promotion includes additional in-store décor and more. Walk through the start line entrance doors to get greeted by Mario’s magical theme song. Even the giant red balls, known as bollards, in front of the stores are being transformed into Mario and Luigi. In total, 650 of Target’s stores nationwide are getting the Mario treatment celebrating the Nintendo switch game’s release.  Check with your local store to see if they are participating. Target considers itself a go-to destination for Nintendo fun from the 1985 Nintendo Entertainment System to today’s Nintendo Switch.

“Experience counts—it’s what keeps guests coming in and coming back to our stores,” says Scott Nygaard, senior vice president, Merchandising, Target. “So we’re delivering the fun like only Target can, giving generations of Mario fans a shopping trip they won’t soon forget.” Mario Kart 8 adds anti-gravity to the race, allowing drivers to race their karts on walls and ceilings during the race.  The game was released for Wii-U in 2014 and hits stores as part of the line up for the coveted Nintendo Switch on April 28, 2017.  The original Wii-U version was well received and offers additional downloadable content, such s additional characters and tracks, to enhance the excitement. While you can pre-order your copy of Mario Kart 8 online, or any time after its release, you only have a couple weeks to get in the game for Target store’s limited time Mario experience.