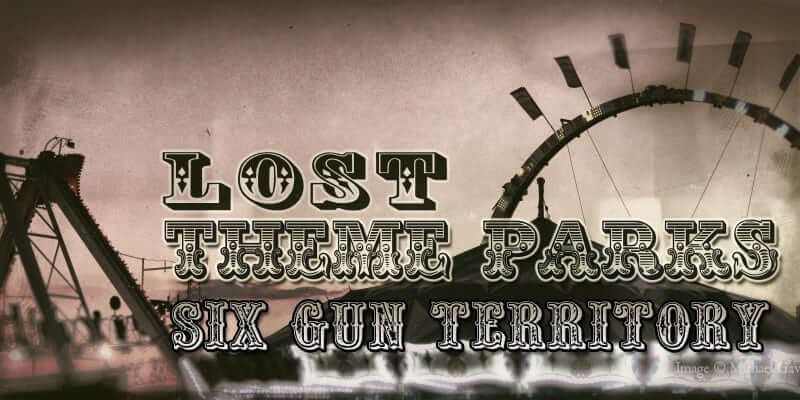 Eight years before Walt Disney set up shop in Central Florida, the Wild West was alive and well in the 200 acre Ocala / Silver Springs based Six Gun Territory theme park.

At a time when television westerns were still watched with wonder, the small theme park prospered. Six Gun Territory tamed the “wild west” in central Florida for 20 years. Other excitement included performances at the Palace Saloon (can-can dancers included), a train ride (prone to hold ups) around the town, an Indian village/trading post, Mexican border town with live acts, an antiques museum, livery stable and even a “county fair” with amusement style rides. Bank robbers and bad guys constantly terrorized the town leaving it up the Marshall and his deputies to keep the peace. Frequent fights found their way into the dusty streets and soon the sounds of gunfire would gather a crowd to witness the ensuing shootout. It was a good run.
Though located nearby another original Florida attraction, Silver Springs (glass bottom boat tours), the parks distance from a rapidly grown central Florida region was its downfall.   Soon after Walt Disney World opened in 1971, Sea World followed a few years later.  Combined with the decline in popularity of Westerns on television, visitors vanished, drawn to the new mega-parks near Orlando.

Sadly, Six Gun Territory closed for good in 1984.  Parts of the park were sold off and the remaining remnants were razed in 1896.  Today the site is home to a shopping plaza.  This wonderful Wild West amusement now only lives in memories and a few brief websites.