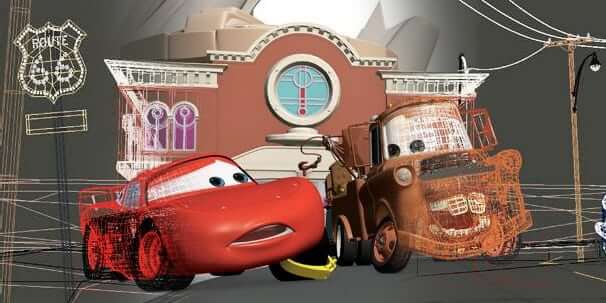 It’s no easy task bringing the third entry in a beloved animated movie franchise to life, especially when the technology involved in making these movies evolves on a regular basis.

Pixar’s character designers and animators have an especially difficult challenge on their hands, considering their animation studio is held to the highest possible standard, and is expected to utilize state-of-the-art techniques in its filmmaking. I recently sat down with “Cars 3” character supervisor Michael B. Comet, directing animator Jude Brownbill, and character designer Jay Shuster to learn about how Pixar adapts to changes in the craft of CGI animation, and what it takes to create new characters that fit in alongside fan favorites.

ITM: Can you tell us a little bit about how animation technology has changed since the first “Cars” movie, and how Pixar adapts to that evolution?

Michael B. Comet: The biggest one [is] our rendering technology and how the images are created. We have a new renderer, a new version of RenderMan, that we’ve been using since “Finding Dory” now. And it’s just way more accurate in how it’s responding to light and reflection, and all of that. In addition we have updated our animation softwar, called Presto. That was updated back on “Brave.” For us it’s basically easier to use and more flexible. For “Cars 3” we were able to bring over what we had done earlier and then augment it with all this new stuff.

Jude Brownbill: In terms of the rigs, they felt like they were a little bit faster than they were on “Cars 2” for animators, so we could iterate a lot quicker and a lot more. And we could also see the textures of the final shader inside the viewport that we were looking at. [Previously] it would just be a base red color or a base yellow color, but we actually could see all that detail when we were animating it [this time], so it informed our choices a little bit.

Jay Shuster: From a character design point of view, because the resolution was so much higher in the effect and the depth of paint, and in the beautiful finishes we’re able to do now, the geometry lying under that paint has to be even nicer and formed to the shapes. We can really dial that stuffn in. Of course [Pixar creative chief] John Lasseter is very interested in making everything as cool as possible, so the pressure was on us to make the coolest characters possible.

ITM: When you’re bringing characters back from the earlier films in the series, are you rebuilding them from scratch or just taking the models that existed already and augmenting them?

Comet: The geometry we actually have from before, so [Lightning] McQueen we basically had from “Cars 2,” although the wing was a little different so we put the spoiler back on. The rest of the characters underwent some tweaks, for example Ramone, because the render was so accurate we ended up noticing that it was kind of wobbly, and so we would plus that. We did something similar with Sally. In some cases we would go back and– for “Cars 3” we have a better mouth topology– so [for] a lot of the older cars we would cut out the old mouth and put the new mouth in, and then we would articulate that.

But for the most part a lot of the geometry came through just fine. The articulation was a little bit more involved because that software has changed. So that’s it. We still have the data [from the previous movies], so we’re able take what was originally there and then just transfer it into our new system. There’s a conversion process that we ran for all of our older Radiator Springs [residents] and other characters that we brought over.

Brownbill: There was a section of our rig testing [wherein] a lot of it was spent [testing the conversions]. I would open up Sally in our old software and have Sally [open] in the new software and make her smile, and really try to match it. Because we don’t want them to look different than they did in the last movie. Those shapes and creases and lines, we really tried to get them right.

ITM: As far as the new characters go, can you give us a rundown about how you approached the characters of Jackson Storm (Armie Hammer) and Cruz Ramirez (Cristela Alonzo), and the design that went into bringing those characters to life?

Shuster: Well, when we first heard about Storm and Cruz, they had no names. They were just these characters in the story that had to serve two or more purposes. In Storm’s case, in the script he was McQueen’s nemesis. The initial step of designing these characters was just getting in the room with [director] Brian [Fee] himself, and having him do a brain dump of everything he knows about this character at this moment in time. We know it may change, and over the course of four years a character like Cruz was so many different kinds of characters.

But in Storm’s instance, he’s McQueen’s nemesis, he’s got to look lethal, he threatens McQueen’s career. He’s got to look threatening in every aspect of his design. I went about researching dangerous-looking cars and dangerous-looking shapes, even to the extent of looking at stealth fighters and how simple and lethal they look. With Cruz, like I said, she went through so many different iterations because her personality traits changed, dictated by the story throughout the course of writing. But we know that she was a female character, and so we had that twofold job of making her modern, but making her forms both elegant and feminine. Both these processes start with months of research, of wallpapering the art room and distilling this character down from a hundred different shapes that are up on a wall, and gleaning from each of those what we want to inform that design.

Brownbill: And Cruz, in particular, she had to stand up against these next-gens, because she’s their trainer. She has to look like she could hold her own against them. But also, when she stands next to McQueen, she can’t look like she’s too big and muscular and beefy. [She would] dwarf him. So finding a balance between those two [was key].

ITM: Speaking of balance, you mentioned something in your talk earlier called “truth to materials.” Obviously the movie stars anthropomorphic cars that have to have human features and be able to move their mouths and their eyelids, and have emotions and expressions. But at the same time you want to retain their car-ness. Can you expound on that concept?

Brownbill: These renders are so great, they look like real-life cars, and we wanted them to feel like they were as heavy and as weighty as a car, but then they also have eyes on their windshield, and they need to emote. They have a mouth that needs to speak, so it’s a balance between those two things. There were times when, coming off other shows, animators would come on this show and treat the car like it was a face. And it would get pushed a bit too far, the brow might be a bit too high, they might squash and stretch it like we’ve been trained to do. And so it was a bit of an education to try and pull back on those things. Less is more, really. And so we just concentrate on the things that we could control within the design, like the mouth and the shape of the lids.

Comet: Sometimes it’s just pushing things too far and you can see where it breaks, and then you know where the limit is and you can pull back from it. And sometimes as, say, the shading gets developed, what looked good in articulation with a flatter surface, now that we’re seeing a texture on there, how that’s moving, we might actually go back and refine that a little bit. Because now we see, “oh, that’s stretching too much,” or the opposite. In some cases like the Legends [characters] with Louise [Nash, voiced by character actress Margo Martindale], one of her lights by her bottom [lip] was so locked-down that it felt a little bit too locked-down, too out of place. So it’s finding that balance between “it’s alive” and “it’s a metallic inanimate car” and putting that needle in the right spot so that we hit it.

ITM: Do you operate by a list of rules of what the characters can or can’t do? Is there a “Cars” animation playbook?

Comet: You guys kind of have [a] design language with the way you shaped Cruz’s mouth and the way you shaped Storm’s mouth. And it seems like you guys developed that language for every main character, of how you want them to behave. And you share that, you guys have libraries of poses that you can share across differen animators, right?

Brownbill: Yeah, so that we can try and keep the characters consistent throughout the whole movie, because there’s many different animators working across this whole film. We do try and solidify the design language we use for the mouth and the lids, and then we can create poses that animators can steal from each other and work into their own work to keep it consistent throughout, so that it doesn’t go too cartoony or too subtle.

Comet: [There’s] a design packet that gets created by [the] animation [department]: a model sheet, that kind of talks to that as well.

Brownbill: [For] all our main characters, we create a model sheet so the animators can take that away and page through it and see which controls this character used a lot [and] what mouth shapes are good on them.

Shuster: I think in some instances those shapes are dictated by the truth to material, because you don’t want something to stretch so much, or look weird.

Brownbill: And a lot of it was dictated by the voice that was coming out of the character as well. We made different decisions for Natalie Certain, who was voiced by Kerry Washington, because she has to say a lot of words in a very short space of time. The way that we animate her mouth is very different [from] the way we animated Sterling’s [Nathan Fillion] mouth, because he’s very suave and sophisticated, and took his time when he was talking. So it’s affected by the voice a lot as well.

Disney/Pixar’s “Cars 3” will roll into theaters on Friday, June 16th.

Comments Off on EXCLUSIVE: Pixar animators get technical, revealing how “Cars 3” revs up rendered realism