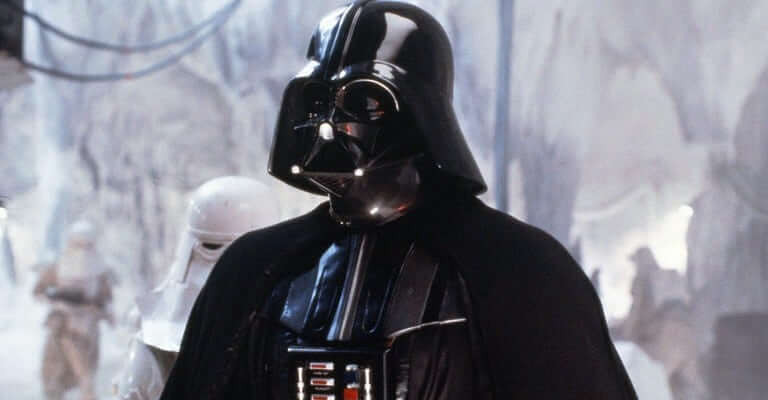 From small son of a slave to sinister Sith Lord, Darth Vader is one the most recognized and feared villains of all times.  His path from promise of hope to darkness and death is a cornerstone of the “Star Wars” universe. When the menacing masked dark lord first appeared in “Star Wars” (later “Star Wars: A New Hope”) his enigmatic and commanding presence instantly catapulted him into one the most liked bad guys ever created.

This was thanks to the deep, authoritative voice of James Earl Jones, the tall commanding figure of David Prowse rolled into a mysterious, black costume with flowing black cape and an eerie, ominous constant sound of his respirator breathing. Vader’s villainy is powered by his dark mastery of the force.  Over the saga, he has tortured, murdered and imprisoned his enemies and bullied events and allies to bend to his will (or the will of his master Emperor Palpatine). The Dark Lord reveals that Luke Skywalker is actually his son in the second film of the original trilogy, “The Empire Strike Back.”  In third episode to the original trilogy, “Return of the Jedi,” it is that bond of father and son that eventually breaks Vader of Dark Side’s grip.  Vader’s final act is one of selfless heroism as he sacrifices himself to save Luke from the Emperor. Several years after the first three blockbuster films, a trio of prequel films was produced.  The films take place 30 years in the past (from the original trilogy) and trace the path of a young boy who eventually becomes Darth Vader.  Anakin Skywalker, the fatherless son of slave Shimi Skywalker is introduced to a young Obi-Wan Kenobi in the first film “Star Wars: Episode I: The Phantom Menace.”

Over the next two chapters we watch Anakin evolve to eventually become a tortured, conflicted Jedi who eventually becomes Darth Vader.  The prequels also lay the groundwork for the emergence of the Empire and its ultimate weapon, the Death Star. While the character of Darth Vader does not appear in the first move of the follow up sequels (“Star Wars Episode VII: The Force Awakens”), a charred remain of his iconic helmet becomes one of the motivational triggers for Kylo Ren. Vader’s final film appearance (so far) was in the stand alone film “Rogue One: A Star Wars Story.” Perhaps as a reminder of where he came from, Vader has constructed a fortress on Mustafar.  There Orson Krennic tries to confer with Vader.

The film’s events lead right up to start “Star Wars Episode IV: A New Hope.”  We again see Vader just before and up to the point where he boards the “Tantive IV” (We’re not sure if it is safe to also mention the brief appearance in the “Star Wars Holiday Special, as we’d prefer NOT to be Force-choked..)

Darth Vader has also been featured in several “Star Wars” comic books and novels.  In both the “Lego Star Wars” and “Star Wars Battlefront” video games as well as “Star Wars: The Force Unleashed,” Darth Vader continues his role as the ultimate bad guy. At Disney theme parks, Darth Vader is seen in one of the many sequences of Star Tours and is also available for meet and greets.

The role of the Sith Lord has been filled by several actors, most prominently Dave Prowse.  Other actors to don the black cape and mask include Sebastian Shaw (unmasked Vader in “Return of the Jedi”), Hayden Christensen (who also portrayed the adult Anakin), Gene Bryant (prequels), Bob Anderson (original trilogy fight scenes), Spencer Wilding and Daniel Naprious (Rogue One). Darth Vader, according to the American Film Institute, is one the top three villains of all time (the top two spots belong to Hannibal Lecter and Norman Bates).   He also appears as a grotesque on the National Cathedral. What is your favorite Darth Vader moment or appearance?  Share your Sith story in the comments below.