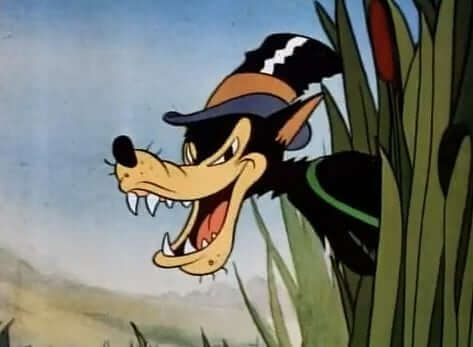 One of the oldest antagonists in literary history is that of the big bad wolf.  He is the epitome of evil and a powerful predator.  The wolf’s appearance in literature includes Aesop’s Fables and Peter and the Wolf.

Walt Disney recognized this potential for villainy, as he cast the Big Bad Wolf as the heavy in several of his animated features. Typically tall, with black fur, wearing red pants with green suspenders and a top hat, this iconic villain was created by Larry White and Walt Disney.  This dapper, yet sinister style has been used in various villain themed merchandise and apparel. Several actors have given Zeke his voice: Billy Bletcher, Jim Cummings, Same Edwards and Tony Pope.  His long toothy snout and big expressive eyes often give him away when in disguise.  His appearance is said to be based upon director Jed Harris. The Big Bad Wolf (aka Zeke Midas Wolf) was first introduced to Disney viewers in the 1933 Silly Symphony “The Three Little Pigs.”  This classic children’s tale about the homes of straw, twig and brick and the three pigs who build them gives us a good glimpse into the guile and strength of the wolf.  With a huff and puff he destroys the first two homes, sending Fifer Pig and Fiddler Pig scrambling for safety.  In the brick home of their brother, Practical Pig, they finally manage the thwart the wolf.

“The Three Little Pigs” is also the first time, “Who’s Afraid of the Big Bad Wolf” is heard. The popular tune would go on to “appear” several Disney cartoons and attractions. The Big Bad Wolf appeared in three more Silly Symphony cartoons.  In April of 1934 “The Big Bad Wolf” added the three pigs to the story as big bad Zeke tried to trap little Red Riding Hood.  Two years later, Zeke teaches his three sons how to hunt the three pigs in “Three Little Wolves.”  Mr. Wolf manages to catch two of the pigs in the 1939 release, “The Practical Pig.” During World War II, Wolf, along with the Three Little Pigs, appears in the 1941 Canadian propaganda piece “The Thrifty Pig.” Since his starring role in those four Silly Symphonies, Zeke Midas Wolf has made numerous cameo appearances in various Disney productions.  One such occasion is the Big Bad Voodoo Daddy parody on House of Mouse.  In brilliant yellow zoot suit, he appears as the vocalist “Big Bad Wolf Daddy.” He is accompanied by the three pigs.  Zeke appeared several more times in the House of Mouse as well as a couple of times in “Who Framed Roger Rabbit.” In a bizarre twist of the tale, the Big Bad Wolf was actually a werewolf in the ABC series “Once Upon a Time.”  The human form of this lycanthrope was none other than Little Red Riding Hood.  Red’s familiar hooded red cloak countered the full moon’s transformative powers and prevented her from changing into the creature. Looking dapper in his purple top hat and tailcoat, The Big Bad Wolf is a minion of Peg Leg Pete in the video game Magical Tetris Challenge.

Zeke Midas Wolf can be seen lurking about the various Disney parks for special occasions as well in parades and shows. Comments Off on Disney Villain Digest: How The Big Bad Wolf has huffed and puffed his way through Disney history