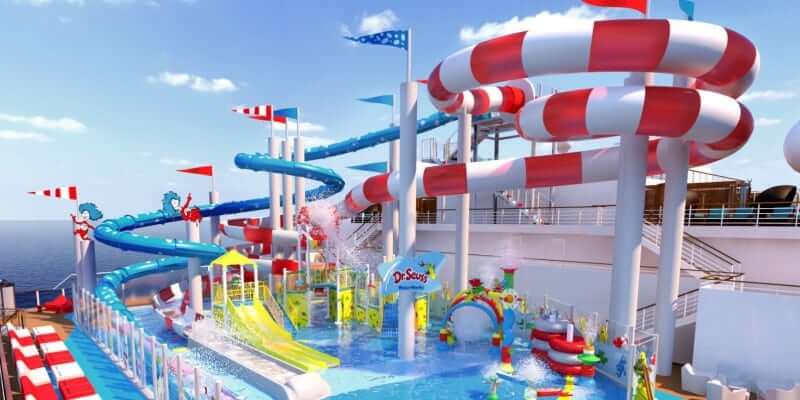 Dr. Seuss-themed activities have been a staple on Carnival cruises since the two joined forces in partnership in 2013. Now a new water park has been announced with two Seuss slides.

The first is named after “The Cat in the Hat,” which take guests on a twisty-turny ride down 450 feet of red and white tubing.

The second slide is called Fun Things, named after Thing 1 and Thing 2. It’s a single-rider, 213-foot enclosed tube with a polka-dot effect. The ride drops guests into a splash zone at the end.

Also featured in the park will be a Cat in the Hat-themed 150-gallon tipping bucket, Seuss-inspired artwork, several splash zones, and statues of your favorite Seuss characters. Even the Grinch will join in on the fun — a statue of him holding a surfboard will be placed in the park. With the addition of the Dr. Seuss WaterWorks park, Carnival Horizon will definitely provide family-friendly activities for all ages. The ship is scheduled to take its maiden voyage on April 2, 2018 with a 13-day Mediterranean cruise set to depart from Barcelona. For more info on booking a trip, you can visit the Carnival website.