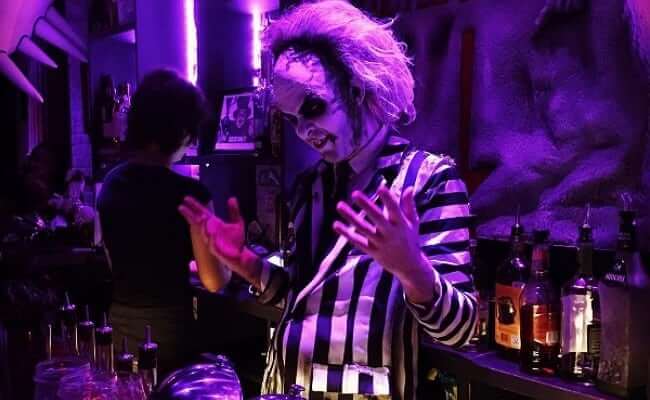 For this incarnation of his Beetle House, owner Zach Neil plans on adding a lot more Burton-esque décor.  The new bar will call the Prospect Theater home. When this west coast pop-up bar opens on May 20th, the stage will be set for whimsical wonderment – literally.   On stage will be a replica of the miniature town that Adam Maitland was constructed before his untimely death in the 1988 film. This “staged” prop is a copy of same model town and tombstones where Beetlejuice first appeared (and just might appear again at the Los Angeles bar). Like its namesake in New York City, Beetle Bar LA, is a temporary pop-up bar not initially intended for long term residence.  Though there are options to continue beyond the conceived 45 day initial run should the Burton themed bar strike a chord with locals and tourists (the NY bar was only intended to be open for less than two months, but has now been in operation for much longer due to its amazing popularity). Similar menu items and themed drinks will find their way from New York to Los Angeles, though the full menu has yet to be revealed. Images in this story are all from the New York location as there is not yet a separate website or Facebook page for the new venue.  The New York Facebook page does have a link for L.A. reservations. Beetle House LA is located at 6365 Hollywood Blvd in Los Angeles.  Make reservations by clicking here (there is a no-show/no-cancel fee).

With a Los Angeles location you never know who might drop by, especially being so close to the major studios (Neil Patrick Harris dropped in at the NY location).