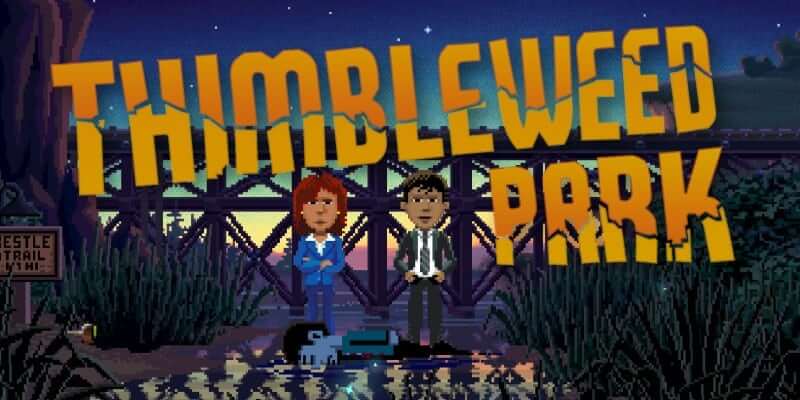 Items I am currently holding: An empty whisky bottle, an Atari cartridge, a gas can, bear repellent, an AT-25 vacuum tube, non-trademark-infringing can of Poopsi™, dripping bloody toilet paper, and a PillowBear from PillowTronics.

On my to do list: Get key to factory gate, find mushrooms in the sewers, find missing joke book page, and collect 43 more specks of dust.

Yep, I’m definitely wrapped up in another graphic adventure game…

That game I’m currently completely consumed by is called “Thimbleweed Park,” which was officially released today.

A lot has changed in the gaming scene in the last 30 years. But my love of point-and-click adventures has not dwindled one bit. I still long for the glory days of the classics like “Maniac Mansion,” “The Secret of Monkey Island,” “Sam & Max Hit the Road,” “Indiana Jones and the Fate of Atlantis,” “Day of the Tentacle,” and “Grim Fandango.” (“King’s Quest” not so much…)

Today’s gaming audience tends to gravitate toward the largely linear interactive stories of modern graphic adventures like “The Walking Dead,” “Life is Strange,” “Oxenfree,” and “Gone Home.” But the puzzle-packed past has made a comeback with the newest game from the man who started it all: Ron Gilbert.

The newest release from the self-proclaimed “grumpy gamer” truly brings back everything I loved about classic graphic adventure games. From its beautiful pixel art to its seductive synthesized soundtrack to its absurd sense of humor, Thimbleweed Park really brings me back to my childhood. Though I haven’t finished Thimbleweed Park yet, I have played enough to reach that magical moment in a graphic adventure game where you go from checking off nearly everything on your in-game “to do” list to suddenly realizing the adventure has only just begun.

It’s that moment when you have unlocked all the major playable characters and suddenly find yourself juggling 10 puzzles at once that truly make you think (like really, really think – hard!) about what your next move is. It’s that glorious moment when you find yourself stuck and are reduced to examining (and re-examining) every single speck of dust on the screen to find the one tiny detail you need to advance. Literally. Thimbleweed Park has specks of dust to collect. Do they have a purpose beyond a Twitter-inspired in-joke? I’m not sure. Am I going to pick every one of them up anyway? Yes, because that’s what you do in a graphic adventure game.

But Thimbleweed Park is thoroughly entertaining far beyond unintuitive collecting/combining of inventory items and using them in unusual ways. (And it’s definitely more than a walking simulator.)

Thimbleweed Park delivers relatable characters in a wild storyline that makes you want to examine every object, push every button, and exhaustively complete every dialogue tree because in this game there is no such thing as a throwaway detail. With every click, you’re rewarded. Whether it’s a joke, a snarky meta gaming industry jab, or an unexpected twist, every detail adds up to total gameplay satisfaction. I suspect some of today’s gamers may find “hard mode” to be unexpectedly challenging, as Thimbleweed Park’s puzzles are often buried so many layers deep that getting the end result requires some real problem solving.

Example from early in the game: To visit a new location, I am told I need a map. To get a map, I need to be sneaky because there appears to only be one in existence in this little town. To be sneaky requires control of two characters, use of one object seen at least an hour earlier in the game, a little social engineering, and use of a new object combined with use of another object picked up near the beginning of the game – but used in an intentionally obscured manner in an extremely non-obvious place discovered much later in the game. (I left all that vague to avoid spoiling the puzzle completely.) It’s extremely satisfying to figure out all the little details that go into something as simple as obtaining a map. But it’s also enjoyably frustrating along the way, requiring some outside-the-box thinking to accomplish the task at hand.

For those looking for a streamlined gaming experience more akin to today’s graphic adventures, Thimbleweed Park offers a well-titled “casual mode,” which offers all of the richness of the characters and the world without running into those potential stumbling blocks. As a lifelong graphic adventurer, I cannot imagine playing a game like this without those hurdles, which are half the fun. But in the day where Twitch broadcasts and speed runs are a thing, it was definitely a wise move to include this “casual” option. No matter which mode you choose, you won’t find anything to dislike about Thimbleweed Park. (That was a really backwards way of saying it’s a practically perfect representation of classic gaming, either way.)

To get your copy of Thimbleweed Park and find out why I added that annoying “a-reno” thing to this article’s headline, visit Steam, GOG, Xbox One, or the Mac App Store today.