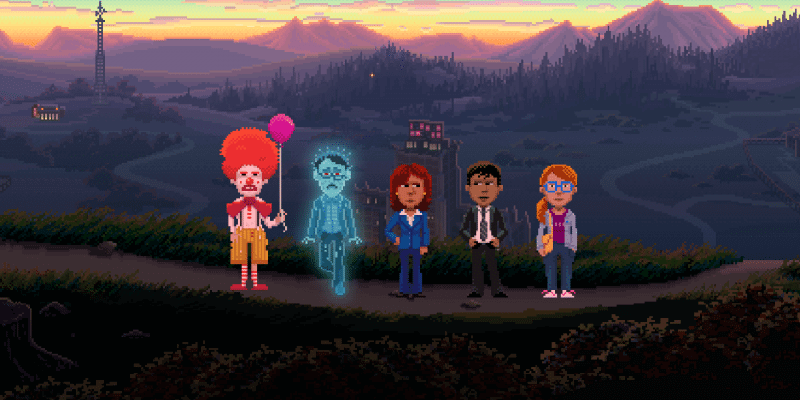 That is the actual opening line to the official description of Thimbleweed Park, the fantastically irreverent new video game from Ron Gilbert and Gary Winnick, creators of Monkey Island and Maniac Mansion.

[NOTE: If you haven’t heard of Monkey Island or Maniac Mansion, stop reading this article right now and go play them. Don’t ask me how. They’re 30-year-old games. You figure it out.]

After completing a hugely successful Kickstarter, Gilbert and Winnick spent the last couple years grinding away at recreating my childhood days of playing classic LucasArts point-and-click adventure games. And they’ve done so with style, recapturing the intent and feel of those original games while offering subtle updates for the modern generation. Thimbleweed Park will be released to the world at the end of this month, but I’ve had a chance to already play the first couple hours of the game – with great delight. This new “neo-noir mystery set in 1987” sucks you in instantly and does not let go, with an onslaught of perfectly pixelated perils and a combination of laugh-out-loud and groan-worthy jokes.

Disney and LucasFilm fans will get a kick out of (more than) a few jabs at LucasArts littered throughout the game, which are witty and well-deserved. Disney – who owns LucasFilm and subsequently LucasArts – is sadly clutching onto the IP rights to Maniac Mansion and Monkey Island, yet doing nearly nothing with them. (Well, to be fair, there were some pretty great special editions released recently.) Gilbert hasn’t been shy about wanting his babies back for future use. Thimbleweed Park is the next best thing. Playing Thimbleweed Park is like spending time with an old friend I haven’t seen in 30 years – one that I can easily be around for an hour or two at a time, but am always happy to see.

This casual gaming experience has been sorely missing from the modern-day generation of fast-paced shooters. There is no way to “lose” Thimbleweed Park, other than not to play. You can’t die. You can’t mess up. You can’t fail. But you do have to rack your brain a bit to solve the brilliant, multi-layered puzzles that gracefully fit in-between the game’s absurd plot lines. (Yep, that means you have to think a bit. Don’t hurt yourself.)

So far, I’ve wandered an abandoned circus, heard a lot (too much) about a burnt-out pillow factory, come close to a dead body pixelating under the bridge, and spent a lot of time futzing around with vacuum tubes. All have been entirely unexpected, but completely enjoyable. I wasn’t intending to turn this article in to a glowing review of the game, given that I’ve only played about 10% of it so far, but I can’t help but gush over the return of my favorite game genre of all time from the guys who pretty much invented the genre.

Look for my full review here on ITM when the game is officially released on March 30th on Steam, GOG, and Xbox One.

Until then, here’s a trailer:

Oh and on the note of full disclosure, I happily backed Thimbleweed Park on Kickstarter and was excited to find my name featured within the in-game phone book on the same page as “Mad Men” star Rich Sommer: