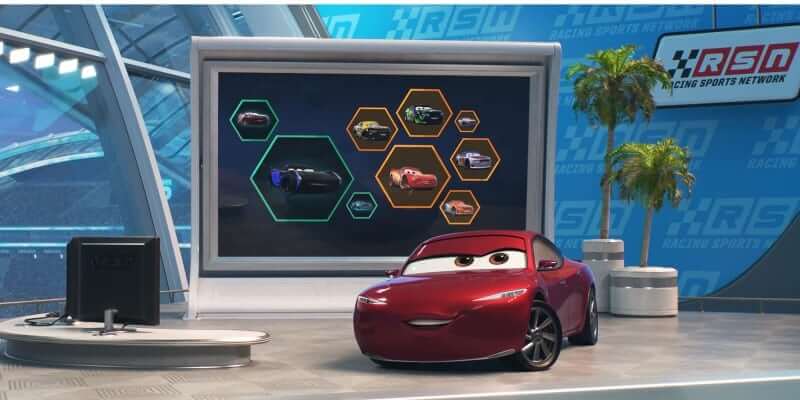 DO THE MATH — In Disney•Pixar’s “Cars 3," Kerry Washington lends her voice to Natalie Certain, a highly respected statistical analyst who knows her numbers. Book-smart and mathematically gifted, Certain is a fresh voice in the racing world. While she may earn top marks in her ability to evaluate a racer’s stats, she could be underestimating the importance of determination. “Cars 3” opens in U.S. theaters on June 16, 2017. ©2017 Disney•Pixar. All Rights Reserved.

This morning, three new additions were announced for the voice cast of “Cars 3”: Kerry Washington (Scandal), Nathan Fillion (Castle) and Lea DeLaria (Orange Is the New Black). Each one brings their own splash of personality to the racetrack with new characters.

Washington has been cast as Natalie Certain, a red sports car that is described by Washington as “a super-smarty-pants statistician” (seen above).

Nathan Fillion will give voice to Sterling, a luxurious business car who runs the Rust-eze Racing Center. He is a laid back personality, but that doesn’t keep him from making sure that he pockets his money at the end of the day. And Lea DeLaria will give life to Miss Fritter, a monster truck school bus. “Cars 3” brings Lightning McQueen back to the racetrack, but this time he is struggling to stay relevant among a crop of younger models. It’s a story of friendship and loyalty that shows that with real friends, anything is possible.