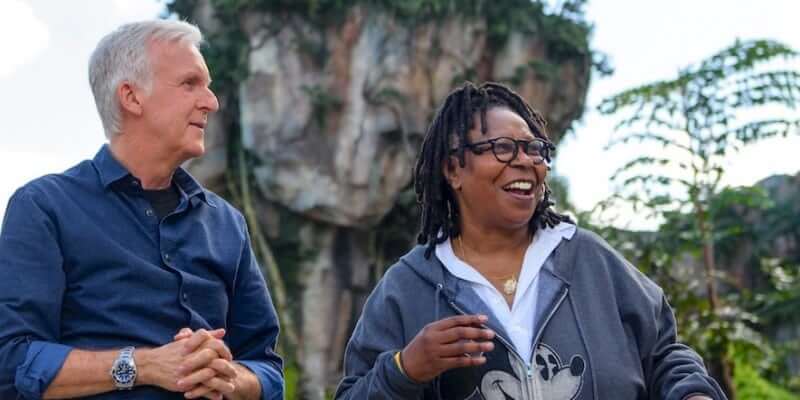 Throughout the day today, Disney’s ABC TV network is offering a sneak peek inside Pandora – The World of Avatar at Disney’s Animal Kingdom.

It all began on “Good Morning America” as Paula Faris walked through Pandora with “Avatar” producer Jon Landau and Imagineer Joe Rohde.

In the first segment of the day, we heard from Landau and Rohde about the bioluminescent plants that will fill the land of Pandora as well as a small look inside the Flight of Passage ride, including an interactive queue element in which you are “decontaminated” and connected to your own avatar:

Landau revealed that for the planned four “Avatar” movie sequels that are in the works, the cast and filmmakers plan to journey to Walt Disney World to feel what it’s like to walk through Pandora, since they only created the world virtually for the first film.

Later on “The View,” Whoopi Goldberg was walked through Pandora by “Avatar” creator James Cameron and took a ride on the Na’vi River Journey: The cast of “The Chew” previewed one of the sweet treats that will be available in Pandora:

We’re ready for sweet treats from #VisitPandora! Get a sneak peek @WaltDisneyWorld's @visitpandora and see even more tonight on @Nightline! pic.twitter.com/DltwE9WBpH Lastly, on “Nightline,” we saw the most in-depth look at Pandora yet – an elaboration on the “Good Morning America” appearance.

Most notably, Landau revealed the ride vehicles for Flight of Passage – which he calls “link chairs” – a row of seats that “link” (as the story goes) riders to the banshees they will be virtually flying on the backs of. Rumors previously pointed to guests sitting on top of animated physical banshees, but as of yet there is no sign of those.

But we do see a wall blocking the camera’s view of exactly how the Flight of Passage 3D visuals are delivered to passengers, which likely will still give the feeling of being aboard a banshee, perhaps without actually climbing on top of one.

Paula Faris throws out a few buzz words in describing Flight of Passage as an “immersive experience” and later “virtual reality” – though she obviously doesn’t literally mean VR. Instead, this is an experience meant to give passengers the very real feeling of riding on one of Pandora’s famous banshees, through simulation. Pandora – The World of Avatar officially opens on May 27th, 2017 at Walt Disney World.