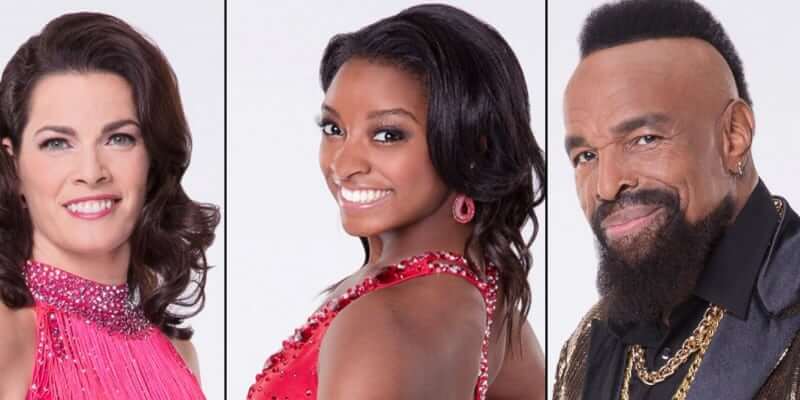 The cast of the 24th season of ABC’s hit show has been revealed – and it’s quite the bizarre assortment of celebrities from all forms of entertainment.

Mr. T will be joining the cast, which will surely add hilarity to the show given his self-proclaimed lack of dancing skills. Other noteworthy appearances include Charo along with Olympians Nancy Kerrigan and Simone Biles.

But surely all eyes will be on Mr. T, as he brings back some funky moves like these:

Here’s the full cast list, with their corresponding professional dancers:

Bonner Bolton and Sharna Burgess
The professional bull rider and model is sure to have a wild time on the dance floor.

Charo and Keo Motsepe
Cuchi cuchi! The actress, singer, and musician cruised on ABC’s The Love Boat, once performed aboard the Disney Magic in 2011, and now is hoping for smooth sailing on Dancing with the Stars.

Chris Kattan and Witney Carson
While he may be best known for his work on Saturday Night Live, actor Chris Kattan is no stranger to the Disney family––Outside of his role as Bob on The Middle, Chris also voiced King Zongo on Jake and the Never Land Pirates. Here’s hoping he brings some of those A Night at the Roxbury moves to the dance floor.

David Ross and Lindsay Arnold
A two-time World Series Champion, professional baseball player David Ross is used to steep competition, and he’ll be facing it on the dance floor on the upcoming season of Dancing with the Stars. Recently retired, you can now find David on ESPN as a TV Baseball analyst.

Erika Jayne and Gleb Savchenko
This real housewife of Beverly Hills trades her high heels for dancing shoes on the next season of Dancing with Stars.

Heather Morris and Maksim Chmerkovskiy
The Glee actress will put her dancing skills to the test on the next season of Dancing with the Stars, but this isn’t her first Disney dance––Heather was featured in Bedtime Stories and the ABC series Eli Stone.

Mr. T and Kym Herjavec
Mr. T famously challenged Rocky Balboa to a boxing title in Rocky III, and now this former member of The A Team has his eye on the mirror ball trophy. Eagle-eye Disney fans might remember his cameo appearances in House of Mouse (as an animated version of himself in the episode “House Ghosts”) and Inspector Gadget.

Nancy Kerrigan and Artem Chigvintsev
Olympian Nancy Kerrigan is no stranger to the stage—and now the figure skating champ is taking off her skates and trying the salsa!

Nick Viall and Peta Murgatroyd
The current Bachelor is trading roses for rumbas as the next Bachelor-turned-dancer, following in the footsteps of former Bachelor and Dancing with the Stars alumni Chris Soules and Sean Lowe. Nick may have taken four turns on The Bachelorette, Bachelor in Paradise, and now The Bachelor to find love (assuming he has…we won’t know until the show’s finale March 13!), but we’re sure he’ll find his footing on the dance floor with ease.

Normani Kordei and Valentin Chmerkovskiy
The Fifth Harmony performer goes solo for a chance at the mirror ball trophy—Disney fans may have seen Normani with Fifth Harmony on Radio Disney’s N.B.T. or caught Fifth Harmony’s performance at the Radio Disney Music Awards just last year (they even performed at D23 Expo in 2013!).

Rashad Jennings and Emma Slater
He’s played pro ball with the Jacksonville Jaguars, the Oakland Raiders, and the New York Giants, and now Rashad is giving ballroom dancing a try.

Simone Biles and Sasha Farber
After winning gold at the 2016 Olympics, Simone is prepping for the silver mirror ball trophy with a turn on Dancing with the Stars. Simone made headlines for her adoration of Zac Efron and, as avid High School Musical fans, we like her style—we’re all in this together, right?

Comments Off on “Dancing With the Stars” season 24 cast announced, celebs to include Mr. T, Simone Biles, Nancy Kerrigan