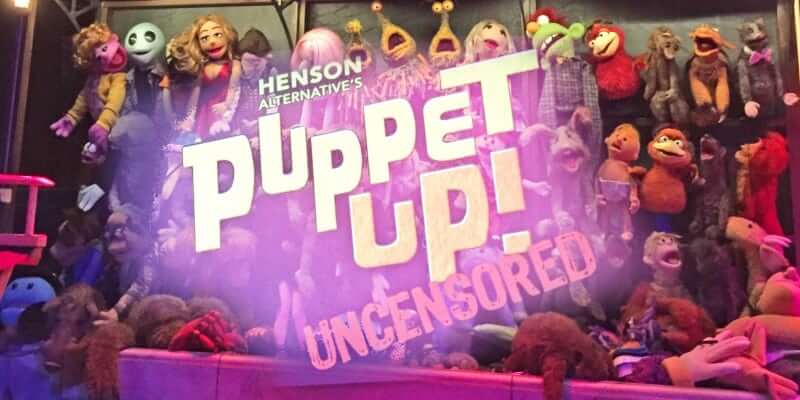 I’ve lived in Los Angeles for roughly eighteen years, give or take, and a good deal of that time was spent residing in Hollywood, just around the corner from The Jim Henson Company’s headquarters at La Brea and Sunset. As a lifelong Muppet enthusiast, to put it mildly, that proximity to the felt and foam of legend was more than a little frustrating. It meant that I could walk past the Henson lot (built as the Charlie Chaplin Studios in 1917– seriously, this place has a lot of history) whenever I pleased, but I could never go inside.

I felt a bit like Charlie Bucket in “Willy Wonka and the Chocolate Factory” or, more accurately, Walter in 2011’s “The Muppets”– in which the Jim Henson Company studios appropriately played The Muppets Studios on-screen.

Well, this past weekend I finally got my wish when I was invited to attend a revival performance of Henson Alternative’s hilariously bawdy adults-only improvised puppet show “Puppet Up! – Uncensored”, presented to the public on the Jim Henson lot itself for the first time ever. (Apologies for all the selfies in this piece, I went a little fan-crazy during my visit.) I first saw “Puppet Up!” back in 2007 at the Avalon Hollywood, but this time it was going to be held on hallowed ground, so I jumped at the chance to be in the audience.

The first thing I noticed upon entering the lot is that I now had a reverse view of the iconic giant Kermit-the-Frog-as-The-Tramp statue perched over the lot’s main entrance– a view that only Henson employees and select guests ever get to see, as the lot is not usually open to the public, for tours or otherwise. Admittedly, The Henson Company has only owned this property since the year 2000– it was the home of A&M Records from the 1960s through the 1990s, and the Red Skelton Television Studios before that– so it’s not like Jim Henson himself ever worked here. But heck, the place is named after him, and the company continues his lifelong innovative crusade into quality children’s (and otherwise) programming, without a doubt going above and beyond to honor his traditions. So it feels like Jim’s spirit is alive and well in this place regardless. Now, onto the main attraction to my visit: the show itself. “Puppet Up! – Uncensored” is a roughly two-hour (with twenty-minute intermission) improv show starring an ensemble of some of the funniest performers Henson has to offer– and their fantastically-lifelike puppets, of course.

Jim Henson Company chairman (and, famously, the voice of Hoggle in “Labyrinth”) Brian Henson introduced the show to the delighted audience set up in one of the studio’s large soundstages. Back in 2007 he starred as the chief puppeteer in the full production, but I imagine he wanted to take a slight step back from the spotlight, as here he only made a couple appearances on stage (and a much closer one with me, after the show). What followed was an uproarious– and almost-unbelievably profane– short-form improv comedy show starring all manner of creatures large and small. Normally I’m not a fan of short-form (the thousand-plus-dollars I “invested” into training at the Upright Citizens Brigade a dozen years ago taught me to look down on anything that wasn’t Harold-level ambitious) but the sheer amount of talent involved in “Puppet Up!” has won me over both times I’ve witnessed it. Also I’m just kind of a sucker for puppets.

At this point the very funny emcee Patrick Bristow (of the first “Austin Powers” movie and many other roles) instructed the crowd not to take any photographs, so the next image is the final one I managed to capture with my iPhone from the show. The improv elements of “Puppet Up!” were also punctuated by two faithful recreations of instantly-recognizable and highly-influential Jim Henson and Frank Oz-designed puppet routines: namely “I’ve Grown Accustomed to Your Face” and “Java”, performed in the 1950s and 60s on television variety shows of the day. It was a thrill to be able to to see these routines reenacted live in tribute to Jim and Frank by such proficient puppeteers whose careers were clearly inspired by their legacies.

Of course, The Muppets  themselves (Kermit, Miss Piggy, Fozzie Bear, The Great Gonzo and the rest) can’t be a part of “Puppet Up!”, as The Jim Henson Company sold the rights to The Muppets’ cast of characters to Disney in 2004. There are still a handful of nods to the Muppets around the lot, however, including this large Kermit which may well be the one from the Muppet*Vision 3D facade removed from Disney California Adventure several years ago. “Puppet Up! – Uncensored” has run sporadically throughout the past decade at different venues around the county, plus a stint at the Edinburgh Fringe Festival in Scotland and a run in New York City under the alternate title “Stuffed and Unstrung”. The show was also featured briefly as a TBS webseries, though all traces of that particular video have seemingly disappeared from the internet.

There are no current or future “Puppet Up! – Uncensored” performances scheduled at The Jim Henson Company headquarters, or anywhere else, but be sure to stay tuned to the official Puppet Up! ticket sales website for any further announcements. If and when this opportunity arises again, you don’t want to miss it.