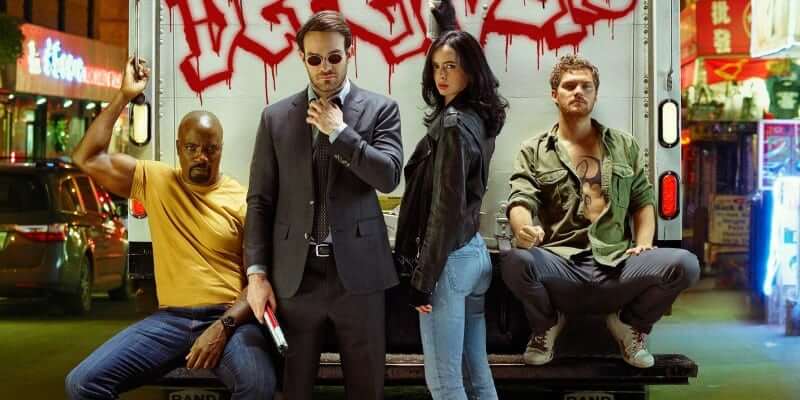 By now everyone knows about Marvel’s cinematic starting lineup: the eclectic team of New York-based superheros known as the Avengers. But while Iron Man, Captain America, Black Widow and the Hulk have been battling baddies on the big screen, a group of second-string do-gooders has been quietly building a loyal following on the streaming service Netflix.

Who are the Defenders?

Initially formed in the comic book “Marvel Features” back in 1971, the original Defenders team lineup consisted of Doctor Strange, The Hulk, and Namor the Sub-Mariner. However, because of the group’s largely unofficial status, they became known in-universe as a “non-team”, with many honorary and associate members joining the ranks through the years– including the Silver Surfer, Hawkeye, Professor X, the Thing, and many more notable names from throughout the Marvel universe.

In the current Netflix iteration of the Defenders, the team is gradually coalescing from a scattered array of superpowered vigilantes who work out of Manhattan’s gritty Hell’s Kitchen neighborhood.

Created by Marvel’s creative mastermind Stan Lee in 1964, Daredevil was ordinary human Matt Murdock until exposure to a radioactive substance both blinded him and heightened the rest of his senses to an extreme level. While battling his arch-nemesis, local crimeboss Wilton Fisk (AKA the Kingpin) Murdock also studied at Columbia University to become a lawyer, later representing famous clients such at the Fantastic Four.

On his eponymous Netflix series, Daredevil is played by actor Charlie Cox (“Stardust”, “The Theory of Everything”). Over the course of two seasons, the hero has taken on an assortment of troublemakers while investigating the seedy world of organized crime.

A relatively recent addition to Marvel lore, Jessica Jones (AKA Jewel, Knightress, Powerwoman) didn’t appear on the comic book scene until 2001, when popular author Brian Michael Bendis created her for his series “Alias”. Born Jessica Campbell and having grown up a childhood friend of Spider-Man himself, Peter Parker, Jones coincidentally gains her powers by– you guessed it– being exposed to radioactive chemicals. After a brief stint with the New Avengers, Jones eventually gives up the superhero business and opens a private detective agency.

The Netflix version of Jessica Jones leads a similar life, having given up crimefighting after an traumatic incident involving mind-controller Zebediah Killgrave (AKA the Purple Man), much like in the comics. On TV Jones is played by Krysten Ritter (“Don’t Trust the B—- in Apartment 23”, “Breaking Bad”) and Killgrave is portrayed by the deviously charming David Tennant (“Doctor Who”, “Harry Potter and the Goblet of Fire”).

Surfacing in Marvel Comics around the same period as Daredevil, Luke Cage was created by writer Archie Goodwin and first appeared in “Luke Cage, Hero for Hire” in 1972. Cage’s character was inspired by the Blaxploitation movement in movies of that era, and began his story as a wrongfully-imprisoned ex-convict. He gained the powers of incredible strength and impenetrable skin after becoming an unwilling test subject in a medical experiment– slightly different from radioactive material this time. He becomes a “hero for hire” and later marries Jessica Jones.

Created by Marvel writer Roy Thomas and debuting in the pages of “Marvel Premiere” in 1974, Iron Fist is an American practitioner of martial arts by the name of Danny Rand. Similar to the origin of Doctor Strange, Rand has gained the ability to summon and focus the force of chi through his extensive training. For a number of years Iron Fist teamed up with Luke Cage as a duo under the title “Power Man and Iron Fist”.

The Netflix “Iron Fist” series is set to premiere on March 17th with Finn Jones (Loras Tyrell on “Game of Thrones”) in the lead role.

Now that you know the basics of Marvel’s existing Netflix series, you can decide whether you want to introduce yourself to the individual stories one-by-one, or just wait until the four above characters team up in this year’s epic miniseries “The Defenders”, likely coming sometime this fall on Netflix.

But what does this mean for the bigger picture of the Marvel Cinematic Universe? Well, beyond giving fans a new, different batch of heroes to follow, “The Defenders” further fleshes out an ever-expanding fictional world. Marvel Comics has over half a century’s worth of stories and a pool of literally thousands of established characters to draw from, so this could theoretically just be the beginning. And could these characters show up in later movies, interacting with the Avengers on-screen? Anything’s possible!

Comments Off on The “Defenders” Initiative: What you need to know going into this year’s big Marvel team-up miniseries