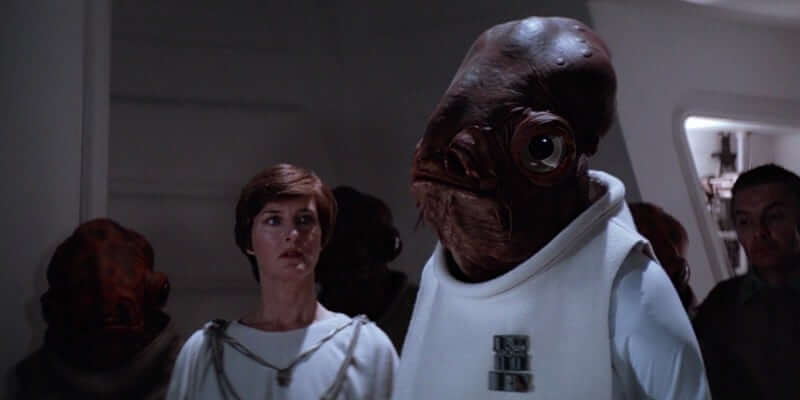 Let’s face it: Star Wars isn’t going away any time soon. With Disney and Lucasfilm already having announced three upcoming movies in the franchise (this year’s “The Last Jedi”, next summer’s thus-far-untitled “Young Han Solo” movie, and 2019’s “Episode IX”) and more almost certainly on the way, it’s safe to say we’re going to be getting new Star Wars content from now until the end of existence or the end of Hollywood, whichever comes first.

With that in mind, we’re going to be starting a new regular feature here at Inside the Magic: at periodic intervals I’ll be writing up character profiles for some of the most influential, most popular, and occasionally the most obscure characters in the Star Wars galaxy. And what better place to start than one near the top of the alphabet: Admiral Gial Ackbar.

Perhaps most widely known in general popular culture these days for his raspy-voiced catch phrase “It’s a trap!”, at this point Ackbar may very well have generated more internet memes than any other Star Wars character. But devoted fans of the saga know that there’s much more depth and history to our favorite fishy friend.

Ackbar got his moniker from George Lucas after he saw a costume design during development of the third Star Wars film, “Episode VI: Return of the Jedi” (released in 1983). In the period leading up to the release of that movie, Ackbar made his first appearance in the syndicated Star Wars newspaper comic strip written by Marvel legend Archie Goodwin.

Six months later, with the theatrical release of “Return of the Jedi”, Ackbar became an international star. Though he’s featured in only a couple minutes of screen time, the admiral caught viewers’ eyes with his bizarre amphibious visage and webbed hands.

Of course, Star Wars licensee Kenner (later absorbed into Hasbro) produced a number of great Admiral Ackbar action figures to tie in with the movies over the years, beginning with one you could get for free by mailing in proofs-of-purchase from your other Star Wars toys.

Creature designer Phil Tippet named Ackbar’s species the Mon Calamari, which seems a bit like a cruel joke until you realize it was a largely tongue-in-cheek behind-the-scenes gag that wasn’t immediately meant to be expounded on. When the character and his ilk became a regular player in the later Star Wars Expanded Universe novels and role-playing games, Mon Calamari became a household phrase. In Star Wars fans’ households, at least.

In his fictional backstory, Ackbar was born on the planet Mon Cala (sometimes called Dac), populated by the Mon Calamari and another species called the Quarren. The two factions were peaceful toward each other for generations until the Clone Wars, when they found themselves at odds and became mired in a civil war.

After his race was subjugated by the newly-formed Galactic Empire, Ackbar enlisted in the Rebel Alliance and the rest is history. Obviously he went on to be promoted to the rank of admiral, commanding a Mon Calamari Star Cruise called Home One during the battle of Endor.

Ackbar is also a key player in several of the official new-canon novels, assisting Princess Leia Organa in her mission to establish a New Republic and extinguish the smoldering remains of the Empire. He then pops up again in “Star Wars: The Force Awakens”, having been re-enlisted into the Resistance against the First Order by now-General Organa after what he thought was his retirement from war.

While Ackbar was portrayed in-costume by puppeteer Tim Rose, his voice was provided in post-production by radio actor Erik Bauersfeld, who also provided the unmistakable cadence of Jabba the Hutt’s Twi’lek servant Bib Fortuna. Bauersfeld unfortunately passed away last year at the age of 93.

All told, Admiral Ackbar is a wonderful example of how a very minor Star Wars character can endure and thrive in the minds of fans and creators alike because of striking production design, convincing animatronics, and a very memorable performance.