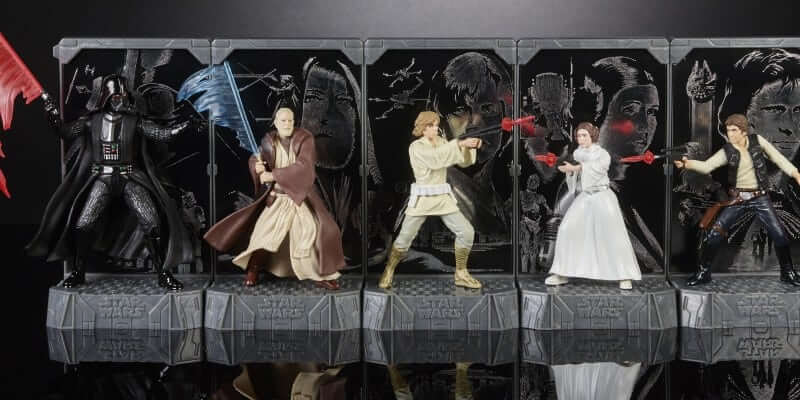 It’s hard to believe, but as of this coming May 25th, “Star Wars” will be forty years old. And with that anniversary will undoubtedly come a bevy of tie-in merchandise celebrating four decades of everyone’s favorite epic space opera from Lucasfilm. The game features “graphics of iconic characters and classic movie moments from STAR WARS EPISODE IV: A NEW HOPE“, plus new alternate rules that incorporate bases and fleets, setting the Empire against the Rebellion in a battle for galactic dominance once more. Up next is the Black Series Force FX Lightsaber, with “a quality metal hilt, built-in accelerometer, realistic light effects, and battle-clash sounds.” Each lightsaber comes with its own clear plastic display base and authentic details in an assortment of colors and designs specific to a variety of characters yet to be revealed. Pictured is the weapon belonging to Obi-Wan Kenobi. Another assortment coming soon is the Black Series Centerpiece statue collection. Each figure “features iconic scenes enhanced with premium light and sound effects”. The example provided by Hasbro depicts Luke Skywalker during the Battle of Hoth from “The Empire Strikes Back”. And finally we have the Black Series Titanium Series figure assortment, each representing one of the main characters from the first “Star Wars” movie, including Darth Vader, Obi-Wan Kenobi, Luke Skywalker, Princess Leia, and Han Solo. According to Hasbro’s official press release, “each figure features a dynamic, double-sided backdrop and character-specific accessory, allowing fans to recreate iconic moments. Even better, collect each individual backdrop to piece together a bigger STAR WARS scene.” It appears as though each character also comes with a unique “action” swap-out piece for their individual weapons. Very cool. While the Titanium Series and Monopoly game will be available this spring in time for the movie’s 40th anniversary celebration, the Centerpiece collection and Force FX lightsabers will not hit retailers until the fall.

Be sure to visit Hasbro’s official Star Wars website for more information on all their Star Wars products.