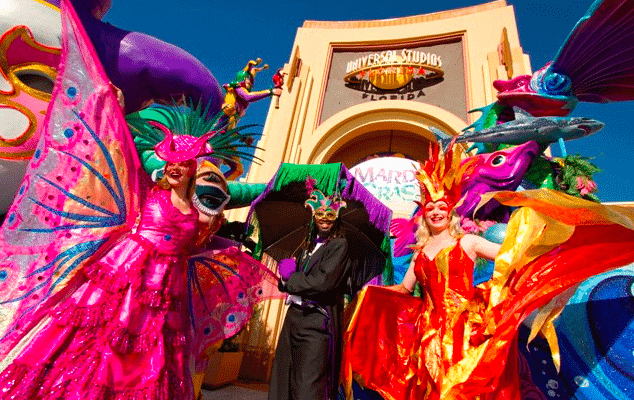 Universal Orlando‘s annual Mardi Gras event is a “carnival” of sorts that celebrates the music, food and fun of the famous Louisianan festival. This year, though, Universal has made getting a taste of the Big Easy even easier by expanding the event to 49 consecutive nights. Having kicked off the season on February 4 and running through March 24, this is the first year that Universal has worked Mardi Gras into their park schedule on a daily basis. This means that if you are planning on celebrating Fat Tuesday, you can actually do that no matter what day of the week it is! However, that’s not all that is happening at Universal for Mardi Gras this year. There are quite a few things to catch in the middle of the chaos. Let’s break it down so that you don’t skip a step. One of the primary elements of the Mardi Gras event is the parade. People line the streets to watch a collection of neon floats and enthusiastic performers pass by to the beat of an energetic soundtrack. It’s quite a scene with stilt walkers and elaborate costumes; nevertheless, this parade is all about THE BEADS. Thrown by passengers on the floats, the crowd reaches to grab these little prizes out of the sky to wear as a trophy for the rest of the evening. This year the parade runs every single evening and includes six new floats under its theme of “Mythical Creatures.” This is an incredible addition as compared with previous years that usually brought about four new floats to the procession and only ran on select nights. These floats showcase vivid colors, animated lights and a few unusual features like fire-spouting arches that are well-themed for the mythical wildlife they are representing. The new floats for 2017 are: Take a look at the gorgeous floats and lively performers from the 2017 Universal Mardi Gras parade!

There are a number of tips to be aware of when it comes to viewing the parade. First, the parade makes two stops for a bit of a dancing and confetti-spewing. Those stops are near The Revenge of the Mummy attraction and on Hollywood Boulevard. Second, Annual Passholders have a viewing area reserved for them near Mel’s Drive-In. Likewise, there are a few ADA areas sectioned off for individuals that suffer from physical challenges. Finally, little tykes have a private spot set up for them in the Little Jester’s Parade Viewing Area in front of the Brown Derby Hat Shop. It’s a good idea to stake your spot about an hour before the parade if you want to ensure a place for decent viewing and great catching. This is a perk for Universal Annual Passholders. Each night a limited number of Passholders and their guests are given places on the floats as well as the responsibility of throwing beads to the crowd. It’s a really fun experience that gives a very unique perspective. There are a few restrictions, and you have to register ahead of time to get this privilege. To sign up and get the 411 on this particular experience, click HERE. We can’t forget about the food, and you will find it all in the French Quarter Courtyard. A selection of New Orleans classics and American staples make up the variety of offerings at booths set up throughout the space. And to wash it all down, Universal has a number of bars that serve, beer, cocktails, and a specialty drink that is unique to the event. Food isn’t the only thing that Universal has brought over from New Orleans. It has also shipped in a number of jazz bands to perform each evening. This year’s bands and schedule are as follows:

On select nights, all the fuss leads up to a big concert, headlined by big names that span a number of genres in the music industry. The crowds pack the park for these groups–sometimes staking their spots near The Music Plaza Stage as early as park opening. This year there are a total of twelve acts scheduled to perform, and 2017 may actually have one of the best line-ups in the parks history. The concerts begin shortly after the parade and usually last between one to one-and-a-half hours. With standing room only, it can be somewhat of a physical challenge, but it’s also worthwhile when the entertainer is particularly strong. A small selection of merchandise that is exclusive to Mardi Gras in Universal can be found in various places throughout the park. One of the most noticeable, though, is The Universal Studios Store near the park’s entrance. There, a selection of beads, hats, masks, t-shirts and even shot glasses can be purchased as souvenirs from your special night. Anything we missed? Tell us your favorite tip to Universal Orlando’s Mardi Gras celebration in the comments below.