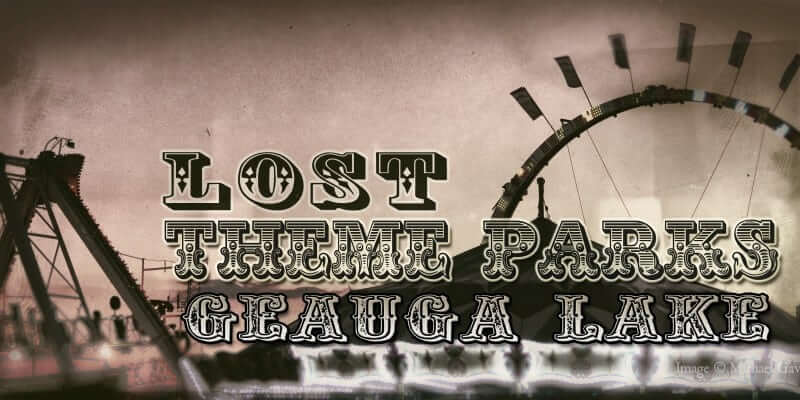 For as long as there have been settlers in the area of what is now Aurora, Ohio, the lake, once home to the largest theme park in the world, has been attracting those wanting recreation.  Geauga Lake was originally called “Picnic Lake.”  Since 1856, when the rail road station set up shop, the area was a popular picnic grounds for the fledgling town. Even before the amusement park was established on the site there was a dance hall, fishing, and even a steam boat to traverse the lake. Major League baseball was the first attraction on site; followed by a steam powered carousel in 1888 (the area was officially designated “Geauga Lake Park a year prior). Pushing the park towards its amusement park potential, the largest wooden roller coaster of its time, Big Dipper, was built on the lake along with an Olympic class swimming pool and a dance hall all moved in during the mid-1920s.  Expansion included a beautiful hand carved carousel and a race track in the thirties and the dance hall was busy enough to attract several big band legends of the period.  A tornado ravaged the amusement park in 1942 and fire took out the dance hall, bowling alley and roller rink in 1952. 1969 was a turning point for the amusement park.  Funtime  Inc., a company formed by three former Cedar Rapids amusement park workers, purchased the Geauga Lake Amusement park from the Schryer family.  Funtime would oversee a major expansion over the fifty-nine years they operated the Amusement park.  When Sea World moved in across the lake, the two parks maintained a pleasant working relationship – both focused on drawing visitors to the area (Sea World was more educational centered at that time, prior to its purchase by Busch Entertainment).  A shift in business models came about in 1973 (years before Disney enacted a similar set up) – instead of paying per ride – the park included unlimited rides in its gate entry fee (prior to that, entry was free). During Funtime’s tenure, numerous iconic attractions were added to the amusement park.  Water rides (including the only wave pool of its kind at the tiem) were added to the point where an entire water park emerged. An observation tower was added.  When the Corkscrew debuted in 1978 (two years after the Double Loop), Geauga Lake became the first park to have TWO looping coasters in operation. Geauga Lake Amusement park celebrated its first 100 years of operation, in 1988, with the addition of new wooden roller coaster: Raging Wolf Bobs (a tribute to a similar coaster in Chicago).  1990 saw the enhancement if Turtle Beach, a children’s water-themed play area.  Over the course of the next few years the midway selection was increased with more thrill rides. Premier Parks, a real estate company from Oklahoma (originally called Tierco Group Inc.) turned its attention to acquiring amusement parks. Funtime Parks, Inc. was purchased in 1995 (along with Geauga Lake, Premier also obtained Wyandot Lake and Darrien Lake –parks similar in style and history to Geauga).  The new owners quickly added to the park in the way of new rides and an expanded water park, Hook’s Lagoon.  In total, over 9 million dollars were invested in additional attractions. The biggest investment for Premier, however, came at the turn of the century, when they purchased the entire Six Flags brand.  Geauga Lake was transformed into Six Flags Ohio with a forty million dollar facelift.  Several roller coasters were added as well as more thrilling water rides. Twenty rides were added with re-branding. Premier (now called Six Flags) was not done expanding.  Sea World, then owned by Busch Entertainment, was transitioning from education to entertainment (and focusing more on thrill rides) made a bid to buy out Six Flags Ohio in an attempt to expand their neighboring theme park.  Instead Busch walked away $110 million dollars richer and Six Flags now owned parks on both sides of the lake.

Six Flags Worlds of Adventure became the largest theme park in world, billing itself at three parks in one: the water park (which would become Hurricane Harbor with the 2003 addition of Hurricane Mountain, one of the largest water slide arrays), Wild Life (formerly Sea World), and Wild Rides (formerly Six Flags Ohio).

Mounting debt from a veracious appetite for expansion forced Six Flags, in 2004, to sell the mega-park to its competition in Cedar Fair (the company running Cedar Point, an amusement park located in nearby Sandusky Ohio).  Six Flags filed for bankruptcy shortly thereafter. Considering Premier/Six Flags was started by former Cedar Point employees, this was quite an ironic change of hands.  It also saw the beginning of the end of the Geauga Park complex.  The Wild Life/Sea World park was mostly torn down (Six Flags shipped the animals out to other parks) and many of the branded rides were re-themed (as Six Flags also retained the licenses to the DC and Looney Toons properties). Cedar Fair tried to keep the park afloat by investing in a new water park on the Wild Life/Sea World site.  $26 Million was pumped into Wildwater Kingdom in 2005 – renaming the amusement park as Wildwater Kingdom and Geauga Park.  A year later the Hurricane Harbor area was shut down after Wildwater’s addition of Tidal Wave Bay.  Several roller coasters were relocated to other amusement parks by the end of the 2006 season.

Most of the attractions are now long gone from Geauga Lake.  The iconic Big Dipper entrance roller coaster was removed this past October.  Retailer Meijer is slated to develop 41 acres of the amusement park to create a superstore.  The giant family owned grocery/electronics/home and style store will be built on what was the parking lot for the historic amusement park.  Meijer intends to include design styles and artwork which pays homage to the sites history.

The long history of Geauga Lake is but a memory now.  Over one hundred years of thrilling entertainment is no longer.  Please help keep the legacy of this lost theme park alive by sharing your memories of Geauga Lake in the comments below.