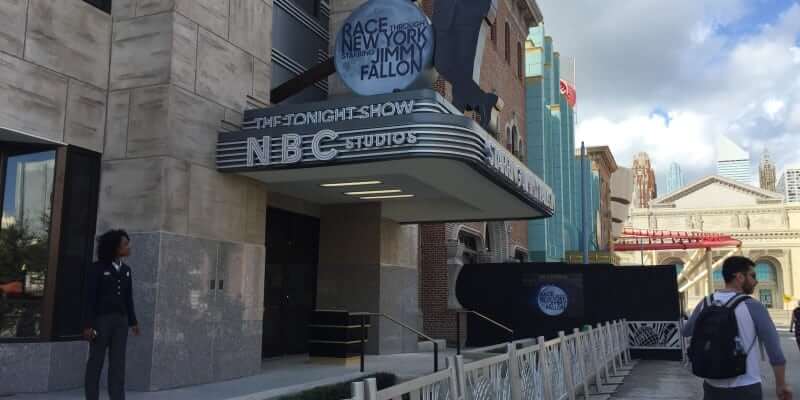 As April 6th approaches–the opening date for Race Through New York Starring Jimmy Fallon–we’re entering that phase where each small development of the building is being closely monitored for signs of a soft opening.

As we reported previously, The Tonight Shop has been open and operating for a few weeks now. If you haven’t had a chance to check it out, this might be the perfect moment to watch our video and let us know what you think.

As for the highly anticipated Race Through New York Starring Jimmy Fallon ride, it’s probably still a little too early to start lining up outside. There is quite a lot of activity on-site, and the construction walls that were around the entrance have now been taken down; however, the entrance itself remains barricaded, and the walls that are shielding the rest of the building from public view remain in place. With the walls around the entrance down, it’s now possible to get a sense of the type of work being done inside. Construction crews, wearing hard hats and safety vests appear very active, surrounded by an array of tools and building materials. All of which is to say, it doesn’t appear as though they’re applying the “finishing touches” just yet. Though, it is clear that we are getting closer. As for how close, time will tell. Rest assured, though, that we will continue to keep an eye on things and pass on what we know.

From what we can observe, Universal Creative is making an effort to give fans an authentic experience as similarities between 30 Rockefeller Plaza and the attraction in Universal Studios Florida are emerging. Instead of an exact 1:1 replica of the New York façade and the famous “Tonight Show” Marquee, Universal has made small changes to allow for differences in scale and layout. Nevertheless, they are retaining some of the key elements that give the distinctive look and feel of the original building. If you look at the photos above and compare them with the facade of the Universal building in our video, you will notice the attention to detail being taken in recreating the “30 Rock Marquee” with regards to font, neon lighting, and architectural design. Additionally, the same construction material is being used for the exterior of the NBC building at Universal as the one in New York. We are also able to see that carvings of people in the style that you find on Rockefeller Plaza have been placed on the building in Universal Studios Orlando. Check the above video to catch a brief glimpse of those.

Things are clearly progressing well, and we expect to be reporting more on this attraction soon. In the meantime, if you need a Fallon fix to tide you over, you can always pop over to I-Drive 360 and pay him a visit at Madame Tussauds. Be prepared to carry the conversation though. (wink, wink)