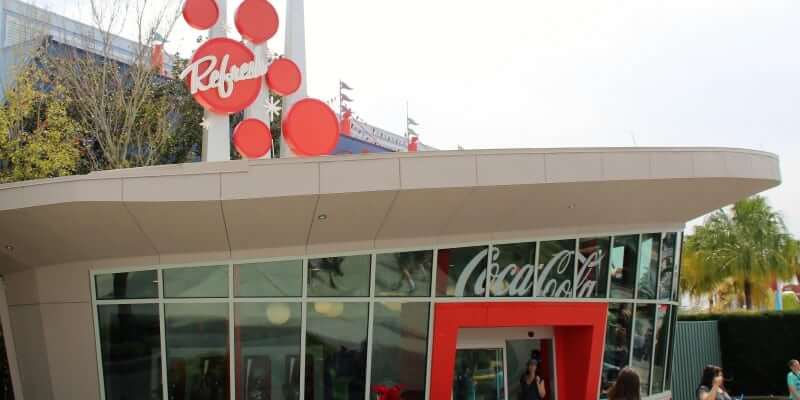 The off-world controlled Coca-Cola Roboasis refreshment center seems to have received final clearance to depart for galaxies unknown.  In its place, a small Coca-Cola refreshment station has recently opened next door to the Men in Black: Alien Attack attraction. The new indoor soda station features freestyle, refillable all-day cups or single serve paper cups.  A unique photo op allows guests to create the image of a giant personalized bottle of Coke which is displayed on the new station’s wall.  Similar to what is used in Toothsome Chocolate Emporium and Savory Feast Kitchen,  walls in the new space feature CGI graphics depicting robots preparing bottles of Coca-cola. The angle frame of this futuristic freestyle, glass enclosed drink department matches the retro-science fiction “The Universe and You” theme of its alien zapping neighbor. All day Freestyle cups cost $12.99 (with additional days able to be purchased at $5.99 each day).  There is a ten minute time frame between available fills of the dozens of different drink options in the Freestyle machines.