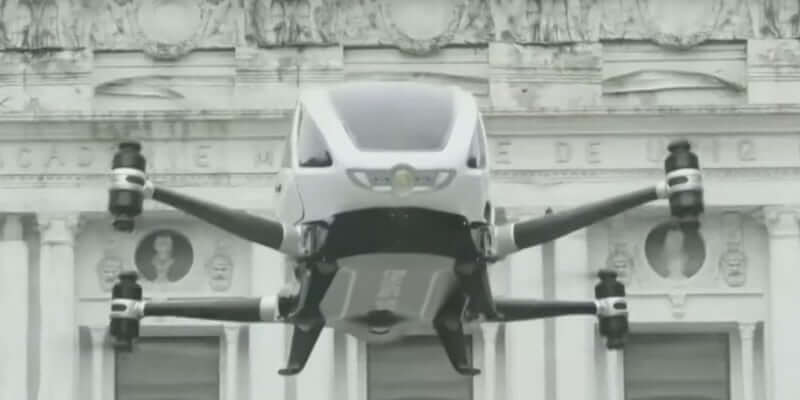 We are now 17 years into the millennium and have yet to see the skies clogged with flying cars.  Until now.  The Chinese built Ehang 184 (184: 1 Person, 8 propellers, and 4 arms) made its debut at the in 2016 as the first drone capable of carrying a human from point to point by air. Even George Jetson would be thrilled to see this new chapter in air passenger conveyance commence.

More than just a concept – passenger flights are set to begin as a taxi service in Dubai this July.  Already testing was in progress as the large drone has been spotted dashing around the Burj Al-Arab building (the structure was designed with a helipad some 690 feet above ground).

Dubai is not the only city that intends to have a fleet of automatic piloted drone air taxis. CES’ hometown of Nevada is, apparently already working on getting permission from the Federal Aviation Authority for similar service.

Having redundant safety systems (including the ability to compensate to a slow landing if one of the propellers malfunctions) and the ability to fit inside the span of two standard (car) parking spaces, the Ehang already has an advantage over its larger cousin, the helicopter.  Another amazing feature of this 260 pound, one-man flyer is that there is NO PILOT.  Once strapped in, the passenger simply plots his course by selecting a destination on the touch screen in front of him.  The drone does the rest, with little to no risk of collision as the entire flight system is programmed to ‘know’ where other drones are flying. The drone  has a cruising speed of 62 MPH and a maximum air time of 23 minutes.  Charging time for the all-electric engine is just under half an hour.

Would you fly in a single person, auto-piloted drone?  What do you think a fair fare should be for such a sky-high journey?  Please drone on in the comments below.