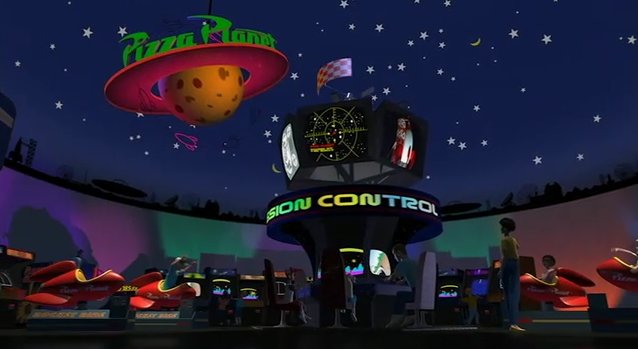 With songs like “Snake in My Boot” and “The Claw,” the punk rock pair of Sweet Baby “Slinky” Shields and John “Nesbitt” Williams, otherwise known as “Pizza Planet”, have released their first album: “Escape from Pizza Planet.”  The five song EP was, per the artists, “Recorded, Mixed, and Mastered in Andy’s room by Rex Hudgins”

With song lyrics like “You are a toy/Andy’s birthday is coming soon/But more importantly there’s a snake in my boot” (Snake in my Boot) or “The claw has chosen me / Left you behind in misery / The claw has chosen me /Farewell my friends /
I’m leaving pizza planet /Double prizes! /Cowboy and a spaceman /Farewell my friends …” (The Claw), it clear that Pizza Planet has their toy stories covered when it comes to paying homage to the Pixar film.  Are they concerned about any action from Disney’s legal department over the references?  Not according to drummer Josh “Nesbitt” Willis.  In a recent interview with the Daily Dot, he advised, “One thing that we’ve always said is that it would be a dream to get a cease-and-desist order from Disney. So if we can get to that point, we’ll consider the band a success.” The “pizzacore” punk pals describe their music as almost violent in its aggressively loud lyrics.  According to Willis, their goal was to take the toy tale and transform it into “something extremely kind of dark, but something fun” For those Toy Story fans (and supporters of Sid) who like in-your-face sounds of punk rock, Pizza Planet is your band.  Check out their album on Bandcamp by clicking here.  Better yet, if you want to book Pizza Planet for your next event – contact info can be found on their Facebook Page.