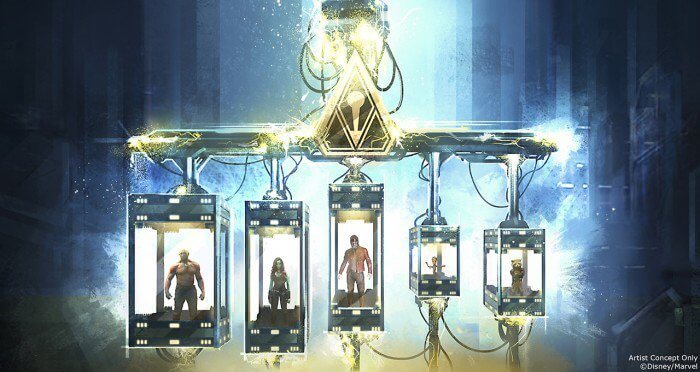 Disney is deep in the throes of overhauling Disney California Adventure‘s Twilight Zone Tower of Terror and making it into Guardians of the Galaxy–Mission: Breakout! We are still months out from its opening date, but new details have now been revealed for this Marvel thrill ride coming to the Disneyland Resort.

Here is a breakdown of what we know (old details as well as new): Joe Rhode, a god in Disney’s Imagineering world, is quoted as explaining:

This is a comedy, action-adventure, prison break. We need none of that [set-up once on the ride]. We invest immediately in movement… Everything that happens on the ride, from the moment you take off, happens in the context of this very physical chaos. The escape is happening, the other animals are escaping, everything in the collection is loose. The guards are trying to stop them. Rocket is trying to control the vehicle that is out of control because he blew the control tower to open the cages. It’s just insane chaos. But really funny, really fun chaos that ensues for the rest of the ride….Sometimes the doors might open. Sometimes the doors might not open because something else will happen. Many things will happen on this ride… It’s a very dynamic ride.

Thankfully, it won’t be too much longer until we can just experience it for ourselves. Guardians of the Galaxy–Mission Breakout! is slated to open this summer.