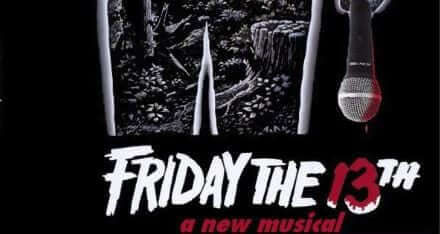 Everyone knows that Friday the 13th is all about superstitions and unfortunate events.  As we engage in today’s triskaidekaphobia (fear of the number 13) and recall that the historical origins of this fear are assumed to center on the Last Supper (13 present) and the unfortunate end to the Templar Knights on that fateful Friday.  A more likely suspect is the early 20th Century novel “Friday, the Thirteenth” by Thomas W. Lawson, or perhaps even a much more modern iconic film series lends to the fear of this 13th day of the month whenever it falls upon a Friday?  Jason Voorhees, the hockey mask wearing, machete swinging supernatural monster of eleven movies (and a reboot).  Jason has a “kill record” of 146 victims (an average of almost 13 per film), way ahead of Michael Myers and Freddy Krueger.

Next, take a peek at this collage of clips from the cartoon series Family Guy, featuring various appearances by the horror icon.

Arsenio Hall was the host of a syndicated talk show (The Arsenio Hall Show) from 1989 to 1994.  To promote the eighth installment of the Friday the 13 films, Jason Voorhees (played by the amazing Kane Hodder) made an appearance on the show.  As we know, Jason is NOT a man of many (or, really, any) words, so the interview was a challenge for Arsenio.

Finally, this frightening find:  Apparently there is a musical version of Friday the 13th.  Conceived at Connecticut College in 2012, this hour and thirteen musical comedic send up of the franchise starts with scenes from Jason Lives: Friday the 13th part 6 and incorporates elements of several of the other movies in the series.  Friday the 13th the Musical: Book, Music and Lyics by Andrew Marko, Directed by Alex Marx and Grant Jacoby (Jacoby also choreographed the production), the entire read through can be found on Friday the 13th-The Franchise website.  We’ll leave you with the final scene (Act 2, Part 2) for your viewing, um, enjoyment.  However we would be remiss if we didn’t warn our readers that this clip contains adult language AND has Jason Voorhees singing the answer to a very important question (one we are asking ourselves now): why?