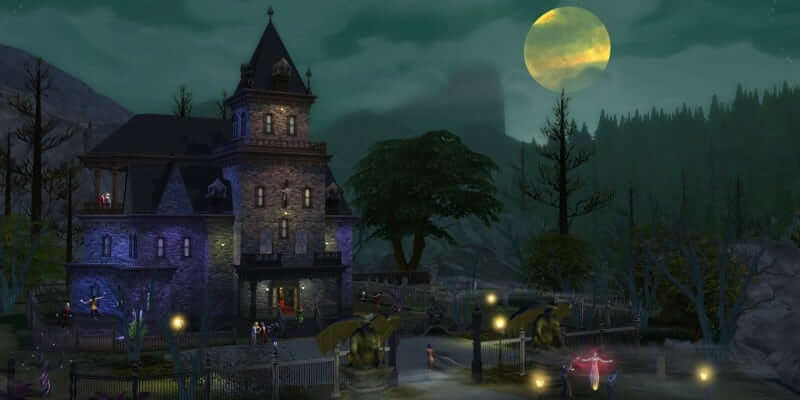 Ever since the SIMS burst onto the PC game arena in 2000, the supernatural has played a role in this life simulation, open-ended game from Electronic Arts.  The popular franchise has seen four revisions since introduction, each one bringing more sophisticated game play and better defined details.  Recently a brand new expansion to the 4th version of the game was announced.  The Sims4 Vampires Game pack is due emerge from its coffin on January 24th and brings with it even more monstrous fun.

Vampires have been a part of the game since the SIMS2 Nightlife expansion pack was released in 2005, but they are not the only supernatural creatures to find their way into the world of Sims. As early as the original SIMS game expansion, The Sims Livin’ Large (2000), players have creatures like zombies, ghosts, robots (servos) and the Grim Reaper wreak havoc upon poor defenseless Sims.  In Makin’ Magic (2003) main characters (and other Sims) Mortimer Goth & Bella Goth could learn to cast spells and conjure up animated garden gnomes and turn Sims into beauties or beasts. When Sims2 was released in 2005, in addition to introducing a 3D environment and more lifelike SIMS,a whole horde of magical and mysterious manifestations materialized.   Ghosts, Aliens, Zombies, Vampires, Werewolves, Servos, Plant Creatures, Witches and even Bigfoot were woven into the various expansion packs. These eerie additions to the “lives” of the Sims also made creating environments much more exciting (with the accompanying accouterments like coffins, candelabras, tombstones and spell books). In 2014, EA Games introduced the final version of the Sims franchise: Sims4.  Initially there have only been a few fiendishly fun factions to play: Ghosts, Aliens, and Vampires.  January’s Vampire expansion pack will focus on and expand the paranormal powers of these creatures of the night.  Soon the undead, red eyed Sims will be empowered to turn other Sims into vampires, among other yet-to-be announced abilities.  Instead of blood, Sims4 vampires sustain themselves on plasma (available to purchase, grow or drain from other sims).  Vampire playtime is limited to in-game sun-down hours as daylight sets these supernatural sims smoldering. As with most expansion packs, Sims 4 Vampires introduces a new realm for its empowered plasma drinking citizens:

Forgotten Hollow is the new World coming in the The Sims 4 Vampires Game Pack. It’s completely different to previous The Sims 4 worlds, and makes a great place for a Vampire to live as night-time lasts long here. There’s one block, with five lots, all centered around a plaza area dedicated to Vlad, the founding Vampire of Forgotten Hollow. You’ll notice that this World looks and feels totally different to the others in The Sims 4, with creeping fog and a lot of withered, old foliage. We wanted this to feel like a centuries-old neighborhood with history and secrets, so there’s also some great Build & Buy Mode objects to help you create your perfect Vampire home. There’s also a lot trait that’ll encourage Vampires to stop by your Sim’s home more often. Don’t worry, Vampires aren’t unique to Forgotten Hollow and they will show up from time to time in other Worlds, just not as often. –The Sims website Like the new Vampires of Sims 4, fans of the seventeen year old franchise are sure to be burning the midnight oil as they explore the eerie options of the new Sims4 Vampires later this month.  Time to build a new castle or two, cemetery optional. . .

Comments Off on Eternal un-life comes to the Sims 4: Vampires expansion pack announced by EA games