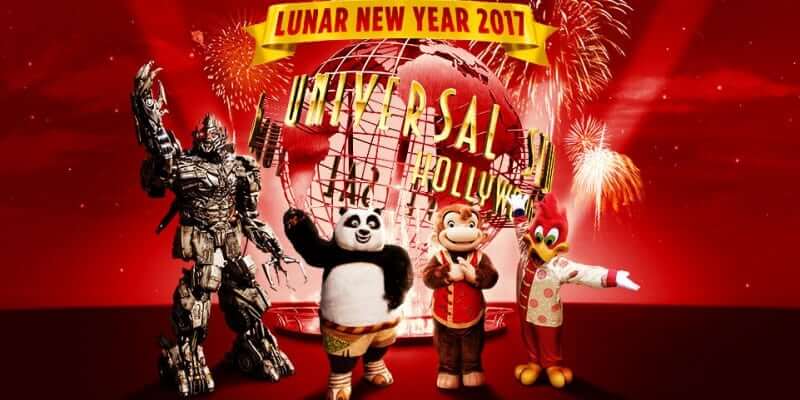 We will also see the star of Universal Studios’ thrill ride “Transformers™: The Ride-3D, MEGATRON, return to his Mandarin-speaking ways to engage guests in conversation characteristic of his persona. Curious George and Woody Woodpecker, who will don festive Chinese attire, will also be joining in on the festivities.

Lunar New Year comes to life within Universal Plaza, situated at the heart of the theme park where guests will be ushered into the polygon-shaped piazza, under a curtain of customary red Chinese lanterns and a stunning plum blossom arch. Inside they will encounter a dozen lampposts, each featuring banners of the twelve zodiac animal signs along with three symbolic attributes. A selection of Asian-inspired treats will also be available, including pastries decorated with the Chinese characters for “Rooster” and “Fortune.”

As part of the celebratory Lunar New Year event, guests are also invited to toast the “Year of the Rooster” at Universal CityWalk’s newest restaurant, Dongpo Kitchen, serving upscale and modern Sichuan cuisine.

The event is included in the price of theme park admission and will take place from Saturday, January 21 to Sunday, February 5, 2017. More information is available at www.UniversalStudiosHollywood.com. Mandarin-speaking guests can learn more about the Lunar New Year event at www.ush.cn.