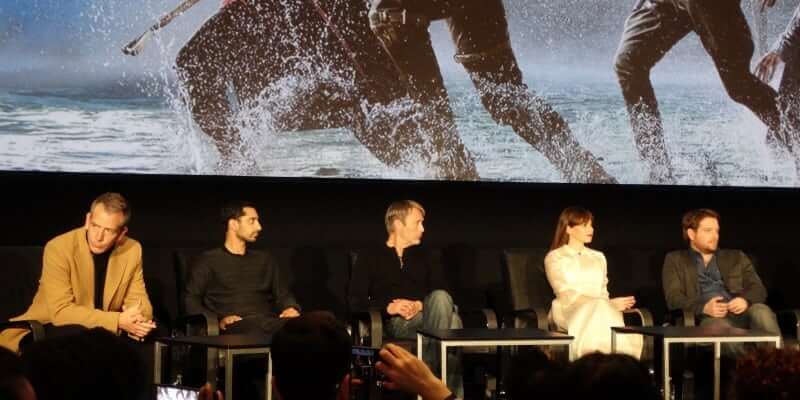 Yesterday at Inside the Magic we featured a story about part 1 of the “Rogue One: A Star Wars Story” global press conference at Lucasfilm’s headquarters in San Francisco. Today we’ll take a look at what happened during part 2, which included the second half of the cast, alongside the return of director Gareth Edwards and Lucasfilm’s president Kathleen Kennedy.

First up, the movie’s star Felicity Jones, who plays Rebel recruit Jyn Erso, talked about what it took to overpower a group of stormtroopers in the film. “In Jyn’s head, it’s very clear. She hates the Empire. So anytime she sees these stormtroopers, she has this very clear instinct to take them down. So I just tapped into that energy that Jyn has, and I’ve never done that kind of thing before.”

“It was very new, the whole physical preparation, that side of acting. I’m kind of used to lots of talking in corsets, so it was really nice to be running around with a blaster and a baton to bash stormtroopers with. But it was an extraordinary process, and you work very closely with the stunt team, who take you through every move and moment and support you throughout the whole thing. I’m very lucky to have had great support from them.” I was lucky enough to have Gareth Edwards answer my question about what format the movie had been shot on, and why. “We had the difficult task of making a film that’s sort of a period piece. We’d say to the crew and the designers, ‘imagine this is set in 1977, and don’t do anything we couldn’t have done back then, in terms of aesthetic.’ And this brand-new camera had come out from Arri and it was incredible, and it’s like four times the resolution of normal film cameras. But Greig [Fraser, the director of photography] was like, ‘This is fantastic, but we also want to go back to the 70s with the analog look of the movie.'”

“And so he got ahold of this Panavision lens that’s 70mm anamorphic, they shot ‘Ben Hur’ with this actual lens. And for the first time ever in cinema, Arri and Panavision, which are two separate companies in the film industry, they came together to make one camera for Star Wars, and it was incredible. For those who are technically minded, what the result is, you get this very narrow depth of field, so if you’re focused on me, the background’s quite blurred and the foreground’s quite blurred. And it was a nightmare for the focus puller.”

“There was this young guy called Jake [Marcuson] and he performed a miracle, because there [were] battle scenes, we didn’t put marks down. We’re just running in there with the camera, and he was always getting the focus. We didn’t drop any shot out of the movie because it was out of focus. And I think a lot of the beauty in the film is down to the cameras that we used. It had that look of a modern version of the past, which is kind of what ‘Rogue One’ is trying to achieve.”

Kathleen Kennedy added, “I think what’s really great about the fact that we’re now moving into these stand-alone movies is that we’re bringing in auteur directors like Gareth, and we’re really supporting those directors and their vision. And we’re looking at each of these movies without a rule book. We’re basically saying, ‘Okay, here’s a new story, a new movie, a new approach. What do we want to do?’ And we’re very open to that. And I think it very much is in the spirit of what George Lucas did to begin with. He inspired [visual effects house Industrial Light and Magic’s] innovation and technological innovation was very important to him. And it’s very much a part of the culture of this company, so that’s what we want to continue.” One reporter asked Kennedy whether other characters from the animated Star Wars television series will end up in the live-action movies, now that Forest Whitaker’s character Saw Gerrera has made the transition from “Clone Wars” to “Rogue One”. “You know, that isn’t really the approach that we have,” she responded. “We don’t sit down and start isolating a list of characters and then build stories around those. We really are starting with the stories themselves and then if some of those characters might come in to what it is we want to do or say, we’ll consider it then. But that’s not part of the strategy.”

Edwards discussed how he and the production design team matched the look of “Rogue One” with the original trilogy. “It was all subconscious, to some extent. We watched ‘Star Wars’ to death. The opening of [‘Rogue One’ is] kind of a reflection of ‘Star Wars: A New Hope’, to some extent. When you think about ‘A New Hope’, the very first time you see the antagonist come in, Darth Vader, it’s a guy in a black cape surrounded by white stormtroopers. And at the opening of our film is there’s a guy in white cape surrounded by black stormtroopers. It’s all these subconscious things where we’re trying to take what’s familiar, but sort of invert it or twist it.”

“Filming that scene with Ben [Mendelsohn] and Mads [Mikkelsen], it was one of the hardest things we’ve ever filmed. Because we were freezing out there. And the worst thing was this fog was coming in and then it’d suddenly disappear. So we’d set up these amazing shots, and we’d be really excited, and suddenly there’d be a white-out, you couldn’t see three meters ahead of you. You’d have to wait, then suddenly it would clear.”

“And these are two of the most incredible actors in the world, and it was just so good to just sit and put them up against each other and let it unfold. And Ben is so relaxed in front of the camera, that he would start just messing around. He’s very playful. And I thought he was reciting Shakespeare or something to get himself into character, and then I would listen carefully to the lyrics and realize he was singing ‘Billie Jean’ by Michael Jackson. And even ‘Frozen’, I think.” Kennedy addressed a question about the mixture of genres that makes up Star Wars, and how the stand-alone movies will continue to experiment with that idea. “Actually, the interesting thing is that that was inspired by George [Lucas]. Because he very much mixed genres, and loved movies, and drew from those examples when he created Star Wars to begin with. And even when George did ‘[A] New Hope’, he was actually cutting in planes from World War II as a way to set up the dogfights, if you will. So that very much continues to inspire what we’re doing, and it keeps the variety.”

Mendelsohn was asked about acting in scenes with the most notorious Star Wars villain. “The first thing you have to do is just get over the fact that you’re doing a scene with Darth Vader. And that took me a little while, because I am a first-generation fanboy. So it took a little while to feel like I could answer him with some solidity, like we could have a discussion, as it were. Also, his gestures and his mannerisms are so familiar, that finding someone that can execute that in a way that is fluid is its own skill set. So that requires a certain amount of though and consideration, too, when you’re doing it.”

Edwards had nothing but kind words to say about his actor. “You all know Ben’s work. He’s got this capability, if he wants to, to be incredibly intimidating. And in the entire process of making the film, he was a kid in a candy store. [He] had an amazing time.”

“And you can tell when [Darth Vader is] coming on set. We learned that we should do the rehearsals and talk through a scene without the costume, because as soon as that helmet goes on, it’s too intimidating. You can’t give direction to Darth Vader. He tells you what he’s going to do.” Kennedy was asked if it’s easier to explore difficult topics and subject matter through the prism of science fiction. “I think it’s one of the things that’s made Star Wars strong, is that those simple ideas have had good and evil very clearly drawn. And this movie is a bit more sophisticated and complicated, and does reflect I think a more complicated worldview today. So yes, to some extent, this story might illuminate some of those things in a way that may start a discussion, which is great.”

She also reflected on the movie’s overall message with a point-blank answer. “Teamwork and belief.” Costar Mads Mikkelsen, who portrays brilliant scientist Galen Erso, ruminated on the difficulties of playing a character associated with both good and evil. “I think that as actors we always try to find the two sides of a character. But definitely it’s in this one, because he’s working together with [Mendelsohn’s character Orson Krennic] on a project that he believes, from the very beginning, has the ability to change the world into a better place. And it turns out that he’s working on something that he didn’t know [about], and for that reason he’s in a gigantic dilemma. And for other reasons I will not spoil here, the dilemma gets even bigger. [These stories] used to be a little more black and white. But there are a lot of greys in [this one]. Actor Riz Ahmed (Bodhi Rook) talked about what it was like having toys made based on his image. “I did get an action figure. I was very pleased because I think he’s a lot better-looking than I am. I think they accidentally modeled it on Diego [Luna] or something. It was a kind of surreal, amazing moment, to be honest. I remember playing with those toys as a kid and so to be part of that universe, in plastic, is an amazing thing.”

Finally, Gareth Edwards closed with compliments for the musical score of “Rogue One”, composed by Michael Giacchino. “Michael did an amazing score for us. He’s a massive Star Wars fan. I think a lot of us compete for who’s the biggest Star Wars fan who worked on the film. I [went] around [Giacchino’s] house, and in his main front room is [a] thirteen-foot tall framed poster of ‘A New Hope’. He said he listened to [the] ‘Empire Strikes Back’ soundtrack to death as a kid, and I think the vocabulary of that music is in him. And it just poured out. There’s particular moments in the film, musically, especially towards the end, that [are] truly stunning and very emotional. And I think he just knocked it out of the park, and we’re very lucky.”

WATCH TRAILER FOR “ROGUE ONE: A STAR WARS STORY”:

“Rogue One: A Star Wars Story” will be released in theaters nationwide on Friday, December 16th.

Comments Off on Rogue One cast, including Felicity Jones and Mads Mikkelsen, unite for Star Wars press conference (PART 2)