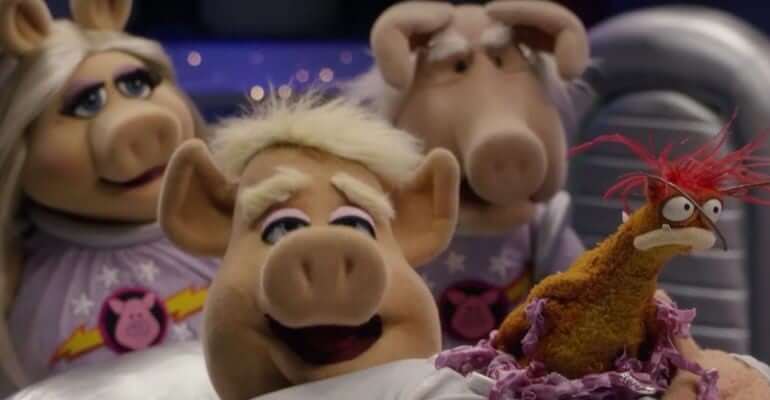 First seen on the original Muppet Show’s second season, the crew of the SS Swinetrek made a long expected return today as Disney made good on a promise made just over a year ago and released a brand new Pigs in Space episode today! At long last, the legendary S.S. Swinetrek returns in the first all-new episodes of the epic “PIGS IN SPACE” saga in more than 20 years! Join First Mate Piggy, Captain Link Hogthrob, and Dr. Julius Strangepork as they match wits with an annoying alien stowaway who really knows how to get under your skin. -YouTube Parodying shows like Star Trek and Lost in Space, the crew of the S.S. Swinetrek made recurring appearances on the Muppet Show with over 30 adventures (including a Star Wars episode where Luke (Mark Hamil) C-3PO and RD-D2 make an appearance).  When the Muppets returned for Muppets Tonight, the Swintrek got a new crew (Captain Pighead, Commander Piggy, Snorty and Lt. Craniac), and a new name: Pigs in Space: Deep Dish Nine: The Next Generation of Pigs in Space. Originally teased at a D23 event last year, the space-faring pigs have finally made their return via the Muppets YouTube Channel.  Pigs in Space – Alien: Look Who’s Coming to Dinner is, hopefully, the first of many more delightful diversions coming our way from the crew of the S.S. Swinetrek!

Comments Off on Gut-busting intergalactic comedy, Muppets’ “Pigs in Space” blasts off with a brand new episode!