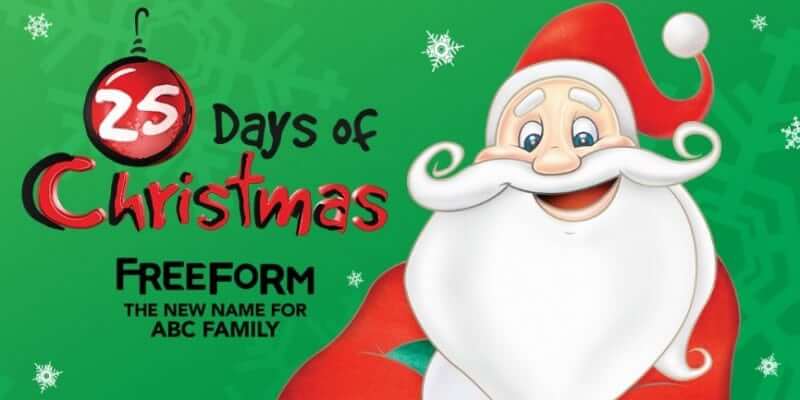 It’s now full holiday hoopla (HOOPLA!) time; red and green everywhere, a billion different variations of the same few carols echo through busy shopping destinations,  holiday treats and feasts are taking shape and travel plans are being double checked. Even the television is getting its annual holiday makeover in the form of hours of special seasonal editions of favorite shows, clever and touching advertisements and holiday specials.

The Walt Disney Company covers this festive viewing extravaganza like no other.  The 25 Days of Christmas are upon us!

Just over three weeks of winter wonderland will waltz across Disney’s Freeform channel from now until the big day, December 25th. Formerly known as ABC Family, this is Disney’s 20th year of gifting viewers with a delightful December dedicated to tinsel time TV (and movie) specials. This year kids young and old can enjoy classics like the Year without Santa Claus, Santa Claus is Coming to Town, and the Little Drummer Boy as well as ‘modern classics’ including The Polar Express, National Lampoon’s Christmas Vacation, Scrooged, and The Santa Claus.

Of course, this wouldn’t be a Disney delivered dash through the snow without a sleigh full of holiday magic from Mickey and his pals. Mickey’s Once Upon a Christmas (and its sequel), all three Toy Story movies, Frozen, Mickey’s Christmas Carol,  both Prep & Landing specials, Tim Burton’s Nightmare before Christmas and Disney’s A Christmas Carol make repeated appearances this month. See the FULL SCHEDULE HERE; then make your plans, prepare the popcorn and get that hot cocoa ready as you’re sure to find a festive feature to enjoy with this year’s 25 Days of Christmas.