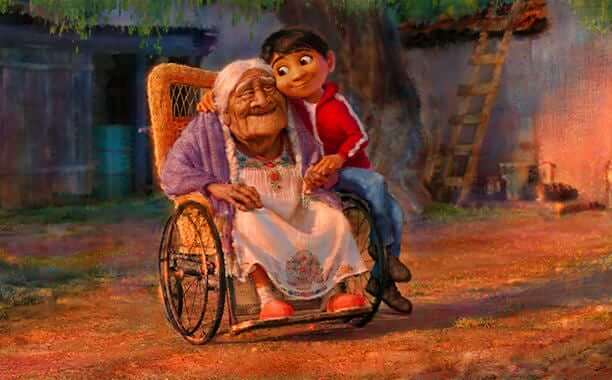 Little has been said about Disney-Pixar’s “Coco” since it was announced at the D23 Expo in 2015. Other than a bit of test animation and the mention of Lee Unkrich as director and Darla K. Anderson as producer, details about the film have been kept under wraps…that is, until today.

Entertainment Weekly broke the long-held silence on this film in a big way this morning with the announcement of its voice cast, plot line, and even a little concept art. The story is that of a young boy, Miguel, who longs to become a great musician in spite of his family’s harsh ban on music. His incredible desire to realize this dream unexpectedly leads Miguel into the mysterious yet beautiful Land of the Dead. There he befriends a “charming trickster” named Hector, and they both set out to discover what lies behind the puzzling history of Miguel’s family.

Miguel will be voiced by newcomer Anthony Gonzalez. He will be joined by Gael García Bernal (Hector) and Renée Victor (Abuelita, Miguel’s grandmother). The big name on the cast, though, is Benjamin Bratt, who was brought in to play Miguel’s music idol, Ernesto de la Cruz.

Unkrich spoke on the film’s goal for an all-Latino cast, stating that this focus enabled them to collect talent from both Mexico and Los Angeles. Entertainment Weekly reported:

Bratt was cast relatively early on — Unkrich says he was the first, in fact — but Bernal took some more internal legwork. ‘Gael was someone we were considering early on, but I didn’t know if I’d be able to sell him [to Pixar chief John Lasseter] because he’s done so many films I’ve loved through the years, but he hadn’t really done comedy … Thankfully, our casting director said, ‘Have you seen this new show that Gael’s in?’ And it was Mozart in the Jungle, and I started watching and thought, ‘Oh my God, he’s so funny, he’s so charming, and he’s perfect.’ So, thank God for Mozart. It didn’t take any convincing on John’s part.

The final puzzle piece was finding Miguel. After a nationwide search for Miguel’s “scratch voice,” he was discovered in Anthony Gonzalez. Gonzalez fit the bill for the role due to his incredible voice talent in not just acting but singing too. In fact, he was so impressive that it was decided he should not only provide the temporary voice for Miguel but  also retain the spot for the film in it’s final form.

With more of the details being unveiled for the film, Coco is slowly taking shape for Disney-Pixar. The movie opens in theaters November 22, 2017.