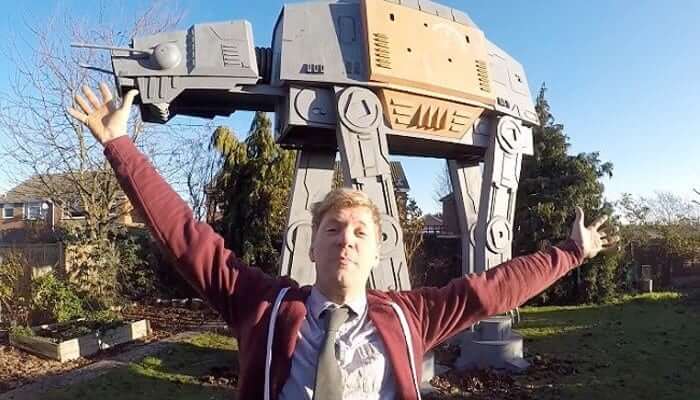 At times it feels like Rogue One: A Star Wars Story has taken over the world as we anticipate its release in theaters. It’s everywhere we look. We have Rogue One trailers on YouTube, posters on walls, clothing, and toys. And for Colin Furze, British inventor, it’s even in his backyard.

Furze has built an 18-foot replica of the iconic AT-AT Imperial Walker, but it’s not just a replica model to be admired. Instead, this thing was built to handle one of the most destructive forces known to humankind, possibly even more dangerous than an intergalactic war–the human child.

Built by Furze and sponsored by eBay, Furze set out to create a playhouse for kids. The set-up comes complete with a control console to move the head and blasters. Ummm…what?!?! Even this forty-year-old mom with a casual interest in Star Wars wants in on that.

Related : Why Is ‘Rogue One’ Trending NOW?

The cool news for the rest of us is that this beauty isn’t actually staying with Furze. Instead, eBay will be gifting the walker to some lucky Star Wars enthusiasts down the line. Fingers crossed that it’s me!