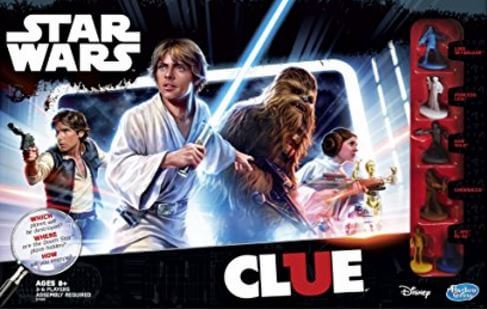 Even the Force may not be able to help players escape the Death Star in Hasbro’s Star Wars version of the classic Clue game! Object of the game is to not only find out which planet is next slated for destruction, but also find the room in which those plans are hidden and manage to select the correct vehicle for escape (all of which are securely sealed in the ‘mission folder’ to be revealed at the game’s conclusion. That’s no moon. . .its a beautiful 3D, multi-level game board shaped like the Death Star (five pieces in all, giving this space station a colorfully coordinated two level, walled game space). It’s the Clue game transported to the world of Star Wars. In this game, it’s a period of civil war, and players have managed to sneak onto the Empire’s ultimate weapon, the Death Star! Be the first player to find out which planet Darth Vader plans to destroy next, which room the Death Star plans are hidden in, and which vehicle is the correct escape vehicle. The cards revealing the correct planet, room, and vehicle are placed in the mission folder at the beginning of the game — no one sees what these are until the end. The player who correctly identifies what’s in the folder wins! Star Wars products are produced by Hasbro under license from Lucasfilm Ltd. Hasbro Gaming and all related terms are trademarks of Hasbro. -Amazon

Clue: Star Wars Edition can most likely be found at your (or Santa’s) favorite toy store or online at Amazon.com (currently at the sale price of $19.99-at the time this article was written).  Get your copy here.