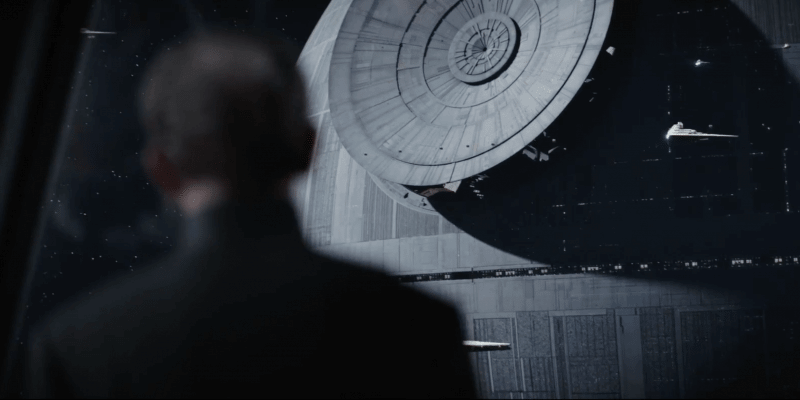 Once upon a time in a galaxy far, far away, there was an Imperial commander played by Peter Cushing in the movie from 1977, Star Wars. It’s been rumored for quite some time now that this villain, known as Grand Moff Tarkin, would make an appearance once again for the upcoming film, Rogue One.

Rogue One, being a prequel of sorts to the Star Wars movies, could easily incorporate this character from the series’ original film. However, no one has confirmed that bit of gossip. We may have just gotten our answer nevertheless.

In the latest trailer released for Rogue One, there is a glimpse of an Imperial commander as he looks upon the Death Star which is being constructed. While a face is not revealed, the head, the hair, and the costume all point to the idea that Grand Moff Tarkin is–in fact–brought into this story. The likeness is so uncanny that a new question has been posed: Is the actor actually Peter Cushing, himself? If it is, we are also looking at some mind-blowing, state-of-the-art technology that Industrial Light and Magic have now harnessed.

Cushing actually died back in 1994, but rumors have persisted that he would be digitally recreated for an appearance in Rogue One. It will be fascinating to see if this is actually the case.

Other films in the industry have done wonders to “un-age” actors in previous projects, such as a younger Anthony Hopkins in Westworld and Robert Downey Jr. in Captain America: Civil War. In those instances, though, the actors provided a baseline performance which the visual effects artists then refined. In this case, the artists would be working with a performance recorded on film nearly 40 years ago in a story that is related to this one, yet it is not the same. Can they do it? Give us your thoughts.