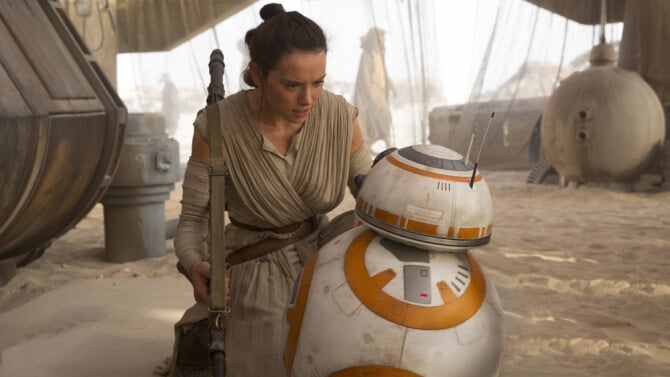 Months after its initial April release on Blu-ray and Digital HD, Star Wars: The Force Awakens arrives again in time for the holidays with a four-disc 3D Collector’s Edition that gathers all of the bonus content released so far along with new additions such as audio commentary from director J.J. Abrams.

Handsomely packaged with a lenticular 3D front image featuring Rey holding Luke Skywalker’s lightsaber, fans get a standard Blu-ray disc with the audio commentary, a Blu-ray 3D disc, a beefed up bonus features Blu-ray disc, a DVD, as well as codes for the Digital HD copy and access to the bonus features.

The most significant addition to the package, besides the 3D version if that applies to you, is the addition of a very informative and entertaining commentary track from Abrams, where he takes great pains to point out what was CGI and what was practical effects or sets. Without giving away too many secrets, he discusses how he used the time while production was shut down after Harrison Ford was injured on the set to rework the relationship between Rey and Finn — which necessitated further reshoots. Abrams even points out that CGI was used to lengthen Ford’s hair in certain shots to match his look from before the accident. Another cool moment is when he discusses how Disney-Pixar chief John Lasseter insisted to Abrams that BB-8 be given more physical comedy to help endear him as a character and that Steven Spielberg had the idea of having the crashed TIE Fighter explode near Finn after being swallowed up by the Jakku desert. The new special features really go deep into the filmmaking process, with special attention paid to the stunning work of Skywalker Sound as well as how the all-female team of talented foley artists worked their magic.

Elsewhere you get a few additional deleted scenes, nothing too earth shattering but it adds value to the entire package, as well as all the bonus features from the first home video release of “Force Awakens” including two shorts “Inside the Armory” and “The Scavenger and the Stormtrooper” that were originally offered by Target as exclusive digital bonus content. A bonus deleted scene featuring Han Solo, Chewie and Finn at Maz Kanata’s castle and “Dressing the Galaxy” (a great look at the incredible costumes that were made for the movie) that were exclusively available on iTunes are now included on the bonus disc as well. For Star Wars completists, the deluxe edition offers up a solid value and is highly recommended, but if you’ve already sprung for the April release and don’t own a 3D HDTV then you won’t be missing out on too much. If you somehow still don’t own the movie, then by all means seek out this superior version. It’s a shame that it wasn’t released at the same time as the standard version so fans could choose between the two.

The “Star Wars: The Force Awakens” 3D Collector’s Edition began rolling out globally Oct. 31 and arrives in the United States and Canada on Nov 15.