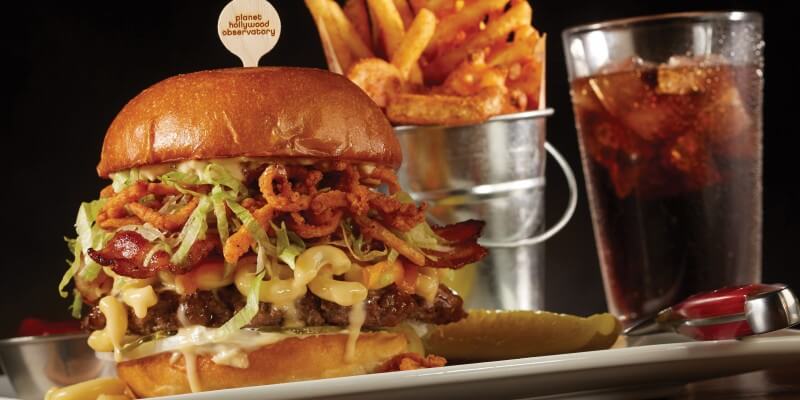 The Planet Hollywood flagship location at Disney Springs in Walt Disney World has undergone a drastic makeover both inside and out as it gets ready to re-open this fall. So it comes as no surprise that the menu has also been reimagined with classic offerings now mixed in with new offerings such as zesty burgers crafted by celebrity chef Guy Fieri as well as local craft brews and spectacularly out-of-this-world desserts.

“We’ve spent an enormous amount of time developing new menu offerings for Planet Hollywood Observatory and striking a balance with keeping our favorites in place,” said Robert Earl, Founder and Chairman, Planet Hollywood International. “We’re excited to offer even more options for our guests, ranging from appealing starters, to light and healthy salads, to indulgent steak and lobster—and everything in between. And they really must save room for dessert—I always do!” Okay so now my mouth is officially watering but there’s also a new area called Stargazers Lounge with live music and a huge assortment of spirits and craft beer to satisfy everyone. From their press release:

A dedicated menu is focused on Florida craft beers from breweries like Funky Buddha, Bold City, Cigar City and Swamp Head and has hand-crafted cocktails made with local fresh ingredients, like the Cosmic Mule New Amsterdam vodka, Limoncino Bottega & real ginger-infused syrup. Keeping in theme with Planet Hollywood’s whimsical nature, spirits are given equal attention with monstrous beverages served in souvenir vessels including the Halley’s Comet served in a 45 oz. Planet-bowl and the Planetary Punch Monkey served in a 21 oz. Comet Glass. Planet Hollywood Observatory is set to re-open this fall at Disney Springs.