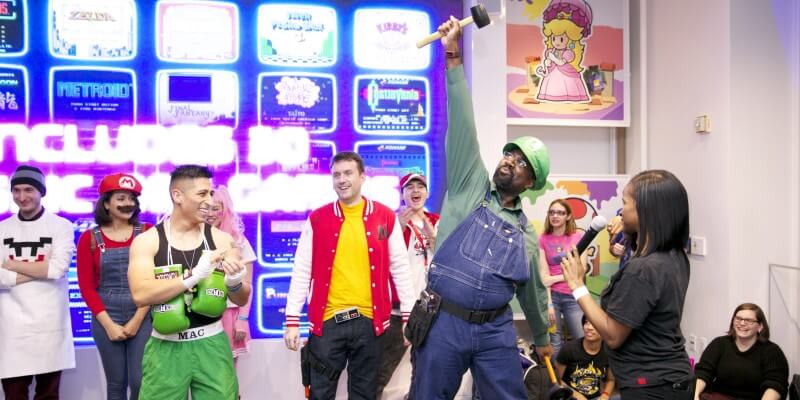 The recent launch of the highly-sought after NES Classic Edition may have frustrated fans who left empty-handed on Nov. 11, the first the pint-sized version of the original Nintendo Entertainment System (NES) that comes with 30 pre-programmed games went on sale for an economical $60.

Luckily for some fans in New York, Nintendo threw a sweet ’80s-themed party complete with a costume contest at Nintendo NY to celebrate on the eve of the launch. Zuri R. from Brooklyn, NY was the lucky, lucky first person to purchase the Nintendo Entertainment System: NES Classic Edition on Nov. 11. (I feel your pain, you also wish this guy in the super cool Nintendo t-shirt was restocking them at your local store.)

No word yet on when fans can expect more shipments of the retro product to be made available for sale but my advice is to be patient and hold off on paying the heavily marked-up prices that third-party sellers want for something that will likely be readily available in time for the holidays for its suggested retail price.

Keep checking back here at Inside the Magic for more Nintendo news and updates on the NES Classic Edition and the Nintendo Switch, their upcoming new console coming in 2017.

Photos courtesy of Nintendo of America