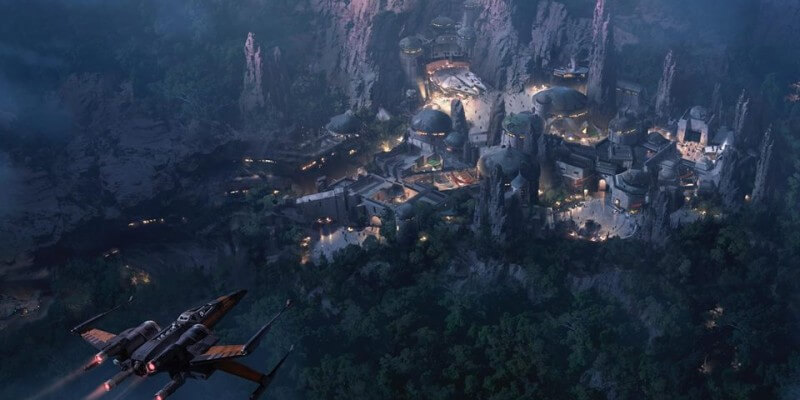 A new image from Walt Disney Imagineering was just revealed for the Star Wars-themed land at Disney’s Hollywood Studios in Orlando, Fla. This time we can see how it will look once the sun goes down. As the concept art shows, the land will take on a whole new dimension after dark with bright lights highlighting little corners and fun adventures across the area.  The image also reveals a peek at what you’ll discover in this all-new land located in the southwest corner of Disney’s Hollywood Studios, including one of the signature attractions that lets you take the controls of the Millennium Falcon.

We’re also excited to share an update that work is already underway at Disney’s Hollywood Studios and Disneyland park in Anaheim, Calif., to bring the stories from a galaxy, far, far away to life in the parks.

During a D23: Destination D presentation today, Walt Disney Parks & Resorts Chairman Bob Chapek also shared that Disney is adding a new adventure to the Star Tours – the Adventure Continues attraction. Walt Disney Imagineering and Lucasfilm teams are currently in production to add an exciting new mission to the attraction based on elements from Star Wars Episode 8.

There will be more to share on Star Wars-themed lands coming to Disneyland and Walt Disney World Resorts as well as Star Tours in the future. Stick with Inside the Magic for more!