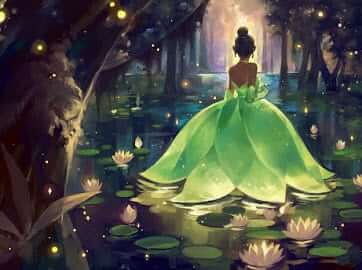 New renditions of Tiana from Princess and the Frog have been released in some beautiful pieces this past week. They were unveiled recently at An Art Tribute to the Disney Films of Ron Clements and John Musker, an exhibit that honors the legendary directors. Together, they have amassed an impressive gallery of work that  features Princess and the Frog and many of the other films that Clements and Musker have produced like The Little Mermaid, Aladdin, Hercules, and most recently, Moana. The limited-time show runs through December 6, 2016 and is on display at Gallery Nucleus in Alhambra, CA.