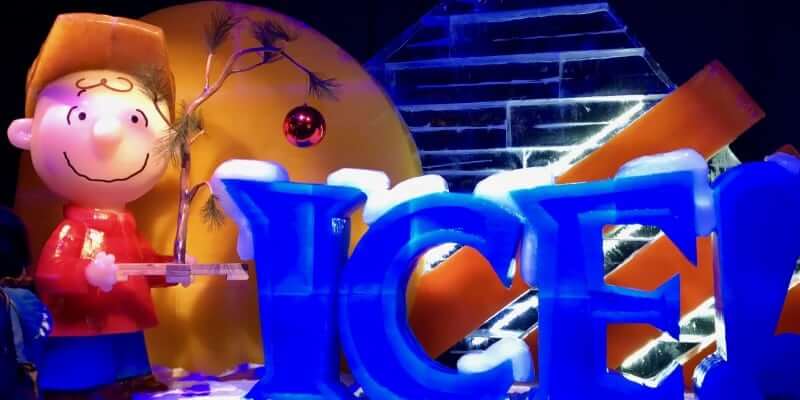 If you’re like me then you’re always on the hunt during this time of the year for fun events to celebrate the holiday season that the entire family will enjoy. A unique and truly wondrous one can be found at the Gaylord Palms Resort in Kissimmee, FL, which is offering up their popular annual Christmas at Gaylord Palms event, this time with a spectacular telling of the classic “A Charlie Brown Christmas” hand-carved using more than two million pounds of ice, the thrilling Cirque Dreams Unwrapped stage show, Alpine Rush Snow Tubing (yes real snow in Central Florida), and much more!

As a first-time visitor, I was amazed that this much was packed into the Gaylord Palms Resort, which is just a stone’s throw away from Walt Disney World. For the opening festivities we were treated to a spectacular six-minute light show, new for 2016, that incorporated a giant 60-foot LED-lit Christmas tree perched high atop the center of the resort. A mix of narration along with traditional and contemporary holiday classics filled the air as a dazzling array of lights and colors were presented, not just on the tree but swirling all around it as well. Right afterwards, a special dress rehearsal of the exceptional Cirque Dreams Unwrapped stage show in front of the Christmas tree left my entire family wanting to see the complete 25-minute show on another visit because what we did see was fantastic. The high-flying theatrics and athleticism displayed were not only impressive, it was all done with a deft touch of humor and smart usage of audience participation. Right after the performance wrapped up to thunderous applause, Mrs. Claus showed after the performance to point out that Santa Claus had indeed arrived, just as we spotted the jolly man swinging down from the very top of the resort’s expansive dome. We were soon whisked off to the main location where most of the holidays events take place.

Kids and adults were having a blast with the Alpine Rush Snow Tubing, where you zip down a tubing hill with real snow underneath you. It is impossible to do this without cracking a wide smile and a laugh, trust me. Also nearby was the new Santa’s Snow Throw, a carnival game-like test where you get a bucketful of real snow balls to hit targets with. Just like the snow tubing, this is another one where all the kids can having fun being kids while the adults act like kids again. Nearby you’ll also find Santa’s Workshop, where the family can take pictures with the big guy himself, a Gingerbread Decorating Corner and Mrs. Claus’ Christmas Traditions, a 30-minute interactive show with a reading of holidays classics and some holiday carols, all accompanied with her very own cookies and cold milk. Yum! There’s also Krispy Kreme donuts for sale, a Build-A-Bear Workshop, and a gift shop. As much fun as all of that was, the centerpiece attraction is the spectacular super-colossal ICE! featuring A Charlie Brown Christmas exhibit. Two million pounds of ice hand carved and carefully maintained at nine degrees, it tells the classic story of the original TV special in a life-size creation that can only be experienced to fully appreciate.

While Gaylord Palms helpfully hands out some comfy winter parkas before you enter the frigid conditions, you’ll definitely want to bring a scarf, beanie, gloves, sweater, closed shoes and anything else you may want to wear so you can comfortably take in the wondrous sights, of which there are plenty, at your own pace. Feel free to join the kids for a huge ice slide that feels like you’re on a gigantic ice cube with the entire Peanuts gang dancing around you as Charlie Brown desperately tries to get everyone’s attention at the rehearsal. And of course we get Linus with his trusty blanket explain the true meaning of Christmas. Surreal. If that wasn’t enough, there’s a huge Nativity scene that is simply breathtaking after the Peanuts story wraps up. Oh and there’s also the On The Blocks Ice Bar if adults need a refreshment as you tour the exhibit. We also took part in the Breakfast with Charlie Brown & Friends that was also really well done, with Charlie Brown, Lucy and Snoopy hanging around and mingling with guests as they enjoyed delicious buffet items including Peanuts waffles with strawberries, whipped cream and syrup nearby as well an omelette station, pastries and so much more as well. There was also an Elf on the Shelf Scavenger Hunt that was an amusing way to get to know the resort better while solving some crafty puzzles (and it was a good way to burn off some of those extra calories consumed over at the buffet). Once we had all the clues in place in our handy booklet, we showed our answers to the concierge for our secret prize.

Check out the the video highlights from just about all of the offerings at this year’s Christmas at Gaylord Palms.

Christmas at Gaylord Palms opened November 18, 2016 and will continue through January 1, 2017. For more information and for a breakdown of ticket prices for the shows, activities and ICE! exhibit (you don’t have to be a hotel guest to join in on the fun), visit: ChristmasatGaylordPalms.com.

Comments Off on Christmas at Gaylord Palms 2016 packs in family holiday fun with ICE!, Cirque Dreams and Peanuts