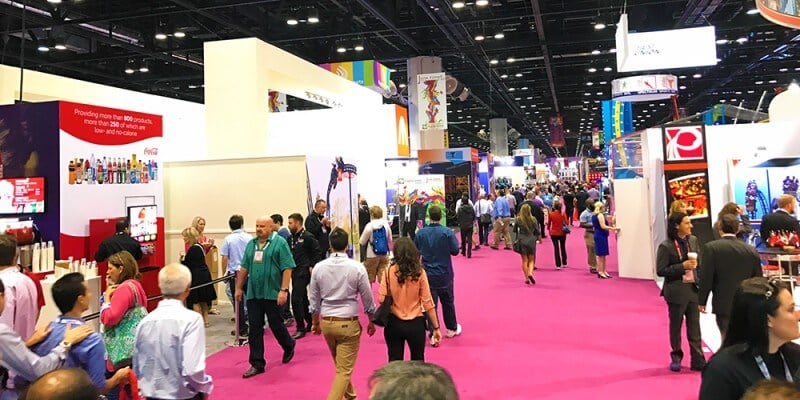 Whether you are a vendor, an attractions enthusiast, or just a technology buff, there really is nothing quite like IAAPA: One of the largest attractions expos in the country. Maybe even the world.

The 2016 expo was held at the Orange County Convention Center in Orlando this week, and the show floor was packed to the brim with experimental tech, delicious food, and massive rides fully constructed indoors. This is my first time attending the convention, and it was certainly a sensory overload upon walking into the massive halls. Seriously, I had no idea where I wanted to go first. Do I hang around the robotics area, dive face first into the inflatable attractions section, or do I try my hand participating in some experimental ride technology? Either way, this was one hell of a day. And what is one hell of a day without some feedback and a little video footage? Below, I’ve documented my favorite things (that’s about as eloquent as I’m getting with that — “things“) that I saw traversing the show floor at IAAPA 2016. Some of these are pretty revolutionary, others are just plain fun. No matter how you slice it, there really was something for everybody at this massive, exclusive convention.

So let’s dive in:

The augmented climbing wall is like a living video game

In case you ever thought using your upper body to traverse great heights was actually boring, this company took the opportunity to create and augmented experience that turns your rock climbing adventure into a full on video game.

Ghostbusters 5D is an actual ride that is actually happening!

Simulation juggernaut Triotech unveiled their all new Ghostbusters 5D attraction, coming soon to Heide Park Germany. The ride is looking to give guests their very own ghost busting experience in a ride car modeled after the classic Ecto 1 vehicle. Here’s hoping somebody picks it up in North America, because this thing looks amazing. You can check out the entire announcement from their press conference below:

The Walking Dead arcade game was a gory blast

While it doesn’t necessarily break new ground, the Walking Dead arcade game was a total blast. Users get to wield a crossbow and take on hoards of the undead. What’s not to love?

The Five Nights at Freddy’s  horror game franchise took off like a rocket, so it was only a matter time before somebody tried to create those twisted machinations for themselves. In this case, Sally Corp. prepped one of those creepy robots in hopes of creating a frightening dark ride attraction. Here’s hoping somebody takes an interest!

SeaWorld San Diego is about to be home to a giant Ocean Explorer world, and this fancy new transport vehicle was unveiled at the Expo. The twist? The entire ride is like an interactive game that helps educate guests on the aquatic world around them. You can check out Brian Morrow’s full explanation below. It’s pretty darn neat:

MediaMation is looking to change the way guests interact with attractions

What if guests waiting in line for a ride could actually interact with those experiencing the ride in virtual reality? That’s what MediaMation hopes to pull it off with their new interactive technology, and while the goals are pretty lofty, the company seems to have all the drive and tech to make it happen.

There were so many more amazing experiences around the IAAPA Expo, and I could probably write 12 articles highlighting the greats from each category. But these were the standouts, in my humble opinion. For more information on the event feel free to head to their official website, or visit our YouTube Channel for even more videos (like the world’s largest Pac-Man game — what?!).

Thanks for reading, and stick with Inside the Magic for all things fun and awesome!

Comments Off on Check out some of the coolest things we saw at IAAPA Attractions Expo 2016!