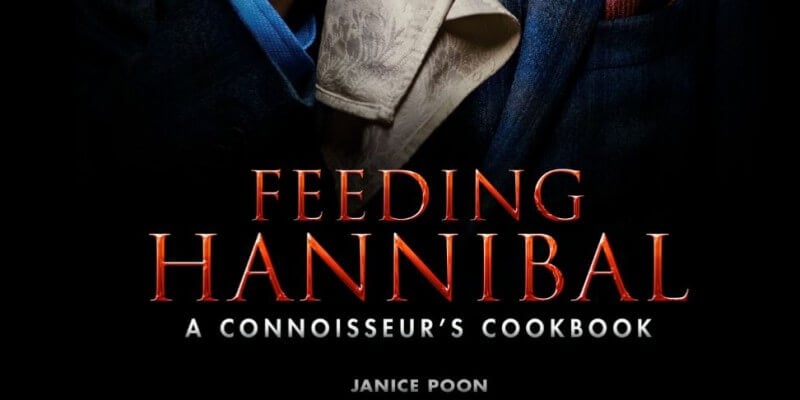 Feeding Hannibal: A Connoisseur’s Cookbook is something fans of the show known as “fannibals,” can really sink their teeth into!  The highly acclaimed NBC television show Hannibal may be over, but the party goes on in this detailed cookbook. The show, based on Thomas Harris’ Red Dragon and Hannibal, aired on NBC from April 4, 2013 until its cancellation in fall 2015; three seasons in all. Aside from its crime and cannibalism themes, Hannibal had a passion for fine dining.  We’re not just talking Chianti and fava beans (as referenced in the film Silence of the Lambs, which inspired the NBC television show).  Creating the art of this fine dining for this series fell to the talents of food stylist Janice Poon. Based on the blog of the same name, which Poon kept during her tenure with the TV show, this cookbook features fine food fit for the cannibal himself, Dr. Hannibal Lecter. Though the series saw Dr. Lecter feeding his victims to honored guest in elaborate dinner parties, the cookbook itself requires no human ingredients. The author also promises that the seemingly intricate delicacies divulged in the directions aren’t daunting at all and even entry-level meal makers should be able to master. With such delicious dark delights like Heart Tartare Hearts (made from veal heart), Pinhead Pork Belly with Sugar Cane Skewers, and Arm Ham Wing, Feeding Hannibal is sure to enhance any Halloween supper party with just the right look for a devious and dark dinner.

Feeding Hannibal: A Connoisseur’s Cookbook is a collection of easy-to-follow recipes inspired by the show and created by its food stylist, Janice Poon. Each recipe is accompanied by fascinating insider’s anecdotes, delightful artwork and revealing behind-the-scenes photos of stars and crew on the set of Hannibal. –Titan Books Feeding Hannibal: A Connoisseur’s Cookbook can be found on Amazon; order here.