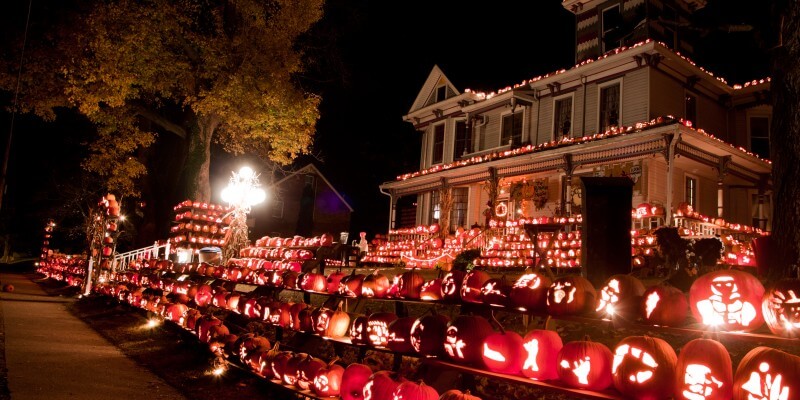 Nestled in the small town of Kenova, West Virginia is the home of what can arguably be crowned the Jack-O-Lantern capital of the world. When Ric Griffth (former Mayor of Kenova) first started decorating for Halloween in 1978, it was with only four pumpkins. Now he’s inspired the entire community to take a stab at decorating for the favored fall holiday.

This Ultimate Pumpkin House is the highlight of the C-K AutumnFest in the communities of Ceredo and Kenova West Virginia. The C-K AutumnFest is held annually the last weekend of October, so for 2018 you still have time to attend this weekend October 26th and 27th.

Each of the 3,000 orange gourds at the Pumpkin House is hand carved and then carefully placed in the display. There’s even a pumpkin ORCHESTRA, with each instrument of the ensemble represented by a carved pumpkin that lights up with the music. Various scenes around the home play out like a day in the life of a scarecrow with Jack-o-lantern topped figures depicting assorted activities like fishing. This tourist attraction draws over 30,000 visitors annually. For those burning for a gander at the glowing gathering (best viewed after dark when the crafted creations come to full illuminated life), the plethora of pumpkins can be found at 748 Beech St. in Kenova West Virginia.