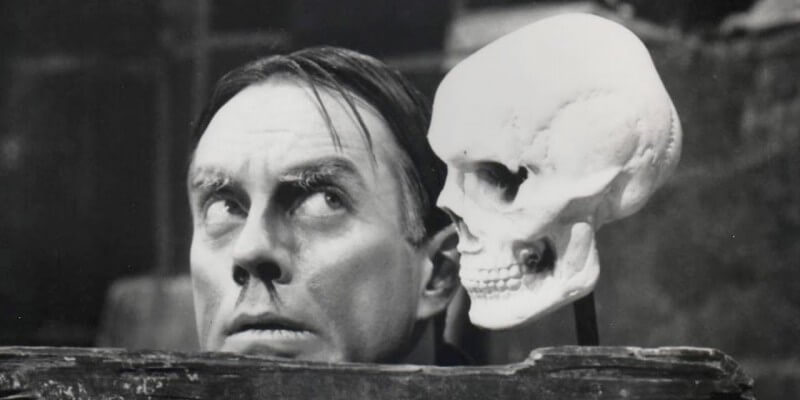 I didn’t think my black heart could add another shade of blue, but it’s true, thee Horror Host of the ages, John Zacherle (aka Zacherley) , has left the mortal coil.  The Cool Ghoul, as he was known, passed away on October 27, 2016 at 98. Creeping onto the airwaves in the 1950’s and 1960’s, the Cool Ghoul haunted viewers in New York and Philadelphia with upbeat deadpan wit and endless supply of bad horror films (paving the way for a host of other kitschy creepy monster movie moderators).  First appearing as undertaker Ro-Land on WCAU’s Shock Theater (1957), he would cut in with comedy bits during various monster movies (something very new at the time).  He hosted Shock Theater for almost 100 episodes in 1957-1958.

In October of 1958, the Shock Theater and Roland would move to New York’s WABC. After changing the name of the show to Zacherley at Large, Roland would become Zacharley and new gags were added (like inserting himself INTO the films he was hosting). John Zacharle was bestowed the name of Cool Ghoul by Dick Clark (the two were friends and John sometimes filled in for Dick during tours of American Bandstand).  Dick Clark helped the horror host record his first record, Dinner with Drac.  Zacharle would go on to record four fearsome monster novelty albums: Spook Along with Zacharley (1960), Monster Mash (1962), Scary Tales (1962), and a shorter reissue of Monster Mash (1964).  In 2001 his macabre mirth and music saw a spooky resurgence with five more CDs (repackaged LPs): Twist Collection (2001), Monster Mash/Scary Tales (2010), Monster Mash Party, Dinner with Zach and Spook Along with Zacherley. The Cool Ghoul even “ran” for President in 1960 as a promotional gag for WOR.  The gag included (highly collectable) campaign posters, buttons and book.

During the 1980’s, absent of his horror personas, John assumed the role of a wizard for the Captain Kangaroo children’s show.

This terrifyingly talented horror host and creepy comedian would continue to make convention appearances up until 2015 (at age 97!). His weirdly wonderful work paved the way for modern horror hosts like Elvira and Svenghoolie. John Zacharley, the Cool Ghoul will forever haunt as his Dinner with Drac, Halloween Hootenanay and creepy cool Monster Mash covers continue to be a staple for Halloween parties and events.

Comments Off on The Cool Ghoul, original horror host John Zacherley, passes away at 98