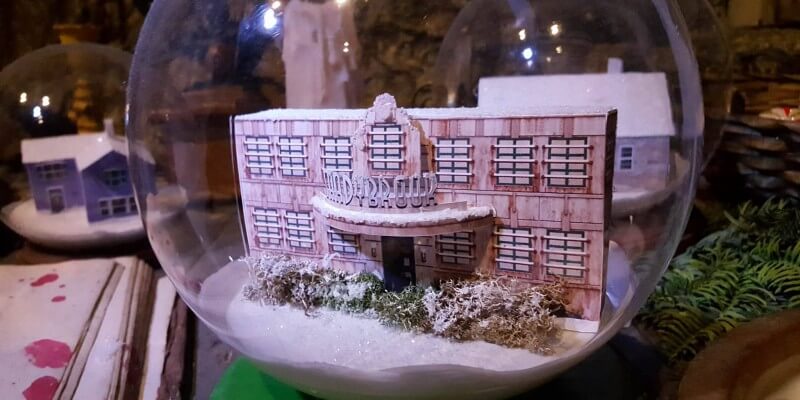 As Central Florida transforms into the Halloween destination every fall, the creative talents at Universal Orlando Resort are just now finishing up the FINAL touches to their Horror Nights masterpiece.

For the 26th incarnation of this dark destination event, there is a record six haunts based on outside licensed properties (IPs, or intellectual properties, as they are referred to).  These include The Walking Dead, American Horror Story, Texas Chainsaw Massacre, Halloween II, The Exorcist, and Krampus.  Each of these IP mazes immerses brave guests in the environment of their respective titles. With lavish detail and fiendishly fine-tuned scares, these haunts delight guests as the frights themselves are dressed up in the form of their favorite horror movie or TV show.  For example, the Exorcist takes guests on a journey from the perspective of the monster/demon.  Each haunt richly relaying iconic scenes and characters as only Halloween Horror Nights can.

But that’s not all, many of these IP haunts (as well as the nightmares Universal dreams up) are steeped in detail and mostly unnoticed surprises that are often missed as one rushes through the night time event.  Enter the Unmasking the Horror tours – an opportunity to tour these monstrous mazes with the lights on.  Until recently, it was even permitted to photograph the devilish details in these movie quality sets. The opportunity to see such skill and dedication revealed in the daytime tours has been a highlight for this lifelong horror fan. Insight into the inner workings of the effects and setups as well as a front row seat to the hidden surprises (also known as Easter Eggs) each haunt harbors.

Krampus (based on the dark comedy Christmas film of the same name) sets the perfect in-story setting for several such “secrets”.  The film’s finale reveals the various homes where Krampus has ‘visited’ – each ‘stored’ in a scenic snow globe. This end moment is included in the Krampus haunt at Universal Orlando. Reader Shawn Tucker was fortunate to be able to snap photos of these special snow globes; special because they depict more than meets the eye.  These microcosms might be a mirror to familiar haunts of years past! (note: the craftsmanship in these works of art might seem familiar – models were created by the amazing Ray Keim; see our story here – and find a link to make your own similar paper models).

Take a peek at the gallery below and see if you recognize any incarnations of Halloween Horror Nights past: