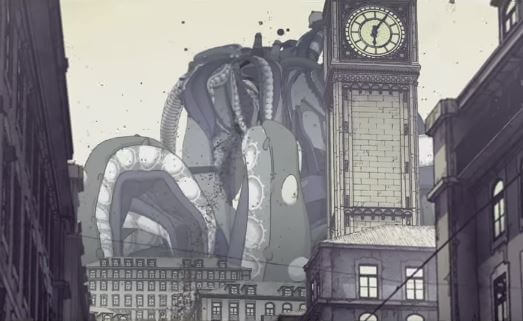 Force of Will, the popular card trading came makes the leap onto the silver screen in 2018 with six short (15 minute) anime segments.  The first of these is based on HP Lovecraft’s Cthulhu mythos.  This is believed to be the first time the Dark One has ever appeared in an anime film. Lovecraft, credited with being the father of modern horror, wrote Call of Cthulhu in 1926, it was first published in Weird Tales magazine two years later.  The iconic mythos of Lovecraft’s world has influenced several science fiction films and games. Card trading game Force of Will leans heavily on the tentacle faced Dark One in the first of its series of anime shorts that make up the movie of the same name.  The letters of a haunted young girl find their way around the glove and seem to summon evil god Cthulhu.

Other segments in the film include Monkey King, Zombie, Pinocchio, Raam: the Bridge to Lanka and Dragon. Comments Off on In a stroke of pure madness, Cthulhu featured in “Force of Will” movie