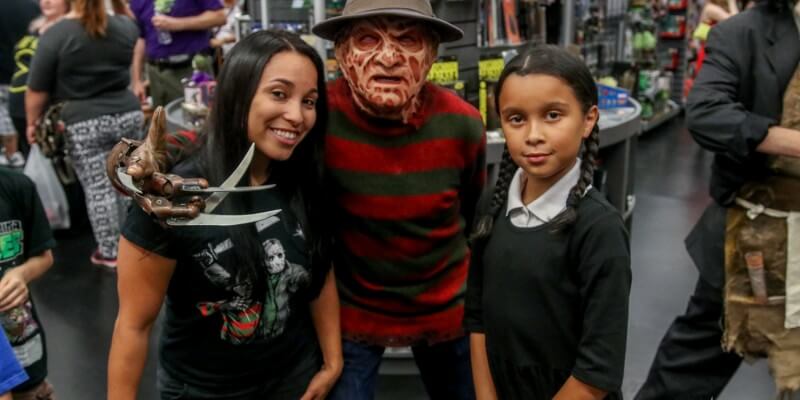 Spooky Empire is arguably the largest horror themed convention in the Southeast, producing shows in Central Florida twice a year. Drawing fans from all over the globe to celebrate the genre with celebrity guests, diverse vendors and epic parties, hordes of fans look forward to the weekend event every fall and spring.

Unfortunately a monster more frightening than any celebrated at this horror convention brought down its wrath on Central Florida last week, forcing the show’s first ever cancellation.  Slated to make its debut at the Orange County Convention Center for its largest event to date, promoters were forced to pull the plug when Hurricane Matthew forced flight cancellations (preventing celebrity guests from attending) and brought about the closing of the county-run event facility.

While fans were dismayed, no one was more disappointed than the show’s producers Petey and Gina Mongelli. In what can only be described as a gut wrenching decision, their hand was forced to shut down the magnificent show they had planned for this year at virtually the last minute.

October 6, 2016 –
This is probably the hardest announcement we’ve ever had to make in the history of Spooky Empire, but due to Hurricane Matthew we are being forced to cancel this weekend. We cannot put our attendees, guests, staff, and everyone involved in harms way. We tried our hardest to keep this open even for part of the weekend but it looks like Matthew wins.

Most flights coming in have been cancelled; meaning most of our guests can’t get here. Many of them tried very hard and rebooked their flights many times. The cast of Stranger Things were still on for Saturday and Sunday, but the chance of their flights getting cancelled as well was inevitable.

No one is more devastated about this then we are. We put so much work and heart into this weekend. For those of you that don’t know us, we are just a mom and pop business, this is not a large corporation. Every part of this event is touched by one of us personally. Our very loyal staff and volunteers have worked their butts off for almost a year on this weekend.

We were ready for one of our largest shows ever, and we hope that this cancellation does not effect us for future events.

Please give us some time to gather our thoughts here and make some decisions. We know you’re all going to want immediate answers, but we are unable to to provide them right now. You have our word, that we will do our best to do the right thing for everyone in this situation.

Thank you so much for your patience and understanding. Here’s where it gets really interesting. You see, Spooky Empire is not like most other conventions. Not only is this show run by hardworking fans of the genre – truly a “mom & pop” operation, the microcosm that is Spooky Empire is best compared to family. Each show is more like a reunion than a themed event with staff, vendors and attendees forging lifelong friendships.

This year, in the face of disaster, something magical happened. Family came together to take care of family. Almost as soon as the storm passed, calls went out to rally and regroup for the weekend.  Longtime vendor Nick S. (Coffee Shop of Horrors) called the owner of local mega-comic shop Gods and Monsters and permission was given to use the venue. Next, he contacted show producers for their blessing on what he had in mind and green-light was given. The result: Saturday and Sunday became Spooky Empire Refugees: Save our Spooky.

Save our Spooky, you ask? A little insight, the convention is produced by REAL people (not a big corporation) who have to spend real money (much of which was already spent in promotion, décor, programs, t-shirts, etc), and also the vendors who bring the amazingly unique items to the convention floor depend on sales AT the event to stay afloat (on top of production costs, there’s table fees, lodging and food they have to cover). Because of all of this, the closing of the convention center for the weekend obviously had a HUGE impact on everyone involved. Magic soon happened. In less than 24 hours vendors, performers, and even a few celebrity guests came together for a completely fan-run event to support one another. Vendors were able to show and sell their art and wares, and fans had a place to gather. Over and over again it was heard WE are a family, we look out for each other. Kane “Jason Vorhees” Hodder dropped in on Sunday to sign autographs and pose for photographs. Fans themselves even donated priceless items from their own collection; vendors gave various items and art as well – all for the daily auction held to help offset the losses incurred by the show producers (over $1000 raised in auction – aka, a good start). As many were, and still are concerned about the future of Spooky Empire,a GoFundMe page was set up to gather donations to help offset the losses incurred.

“If you care…Share!!! Donate please, and as I and we all know there are many people in need from the Hurricane and a silly Horror con is low on the list. But Pete and Gina Mongelli lost their livelihood and much more due to the storm … But if everyone just gave 1 to 5 dollars, then months from now when you need that break from who the hell knows what is coming next in this country and life…You made a deposit on keeping your sanity. Besides many people are way out of pocket and this could help get it all back. A dollar from 100,000 people is not really all that hard to do with the interwebs. So spend a buck and you can always get a free cup of coffee from Coffee Shop of Horrors. Try THAT at Starbucks! A buck will get you the cup and nothing more. Lol! Thanks and hope everyone you know or love is safe from this beast of a storm” – Mitch H. (event auctioneer and author of Bubba the Redneck Werewolf). Show co-producer, Denna E. further suggested additional ways concerned fans could help, “Buy from the Spooky Empire store. T-shirts, posters, merch and be in the look-out for auction items. The link is on the website and show merch is being loaded once inventory has been done. Once tickets for the April show go on sale, buy a ticket or two. The ticket sales money is what goes into creating the show. Marketing, expenses, set up etc. Buy a program ad in the April show program”