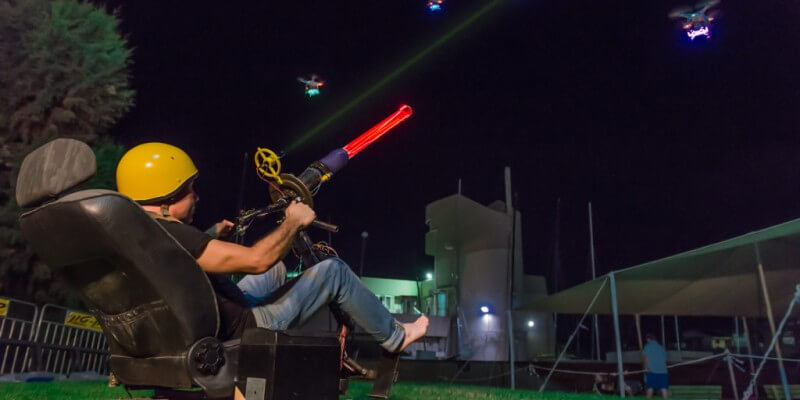 Technology can be a beautiful thing. Advances in phones and computers means that the cell phone in your pocket has more computing power than the NASA space shuttle ever did. Tech usually makes life easier and adds more time for leisurely activities like more tech (video games, home theater, theme park rides).

Sometimes the marriage of tech and ingenuity is pure genius. Enter the team at For Real. They’ve just created a brand new twist on the classic Space Invaders game.

Called, Spaced Out, the game involves several drones, led panels and special hive software that allows the “alien” drones to fly autonomously. As the drones/invaders take flight the player is seated in “the cockpit” (consisting of a reclining car seat mounted on a horizontal rail).  It’s then up to this lucky defender to blast the incoming aliens out of the sky. Imagine the excitement of actually zooming back and forth while attempting to line up the perfect shot.

Using Drones equipped with light sensors and LED strips we animated the space drones and arranged them in a game formation using a specially developed autonomous flight software.

On the ground the player sits on the laser gunner station which moves across rails and shoots laser beams. For Real website

We cannot wait to see this brilliant battle burst its way into a local theme park or attraction.  For more info on this giant sized game, check out the For Real website.