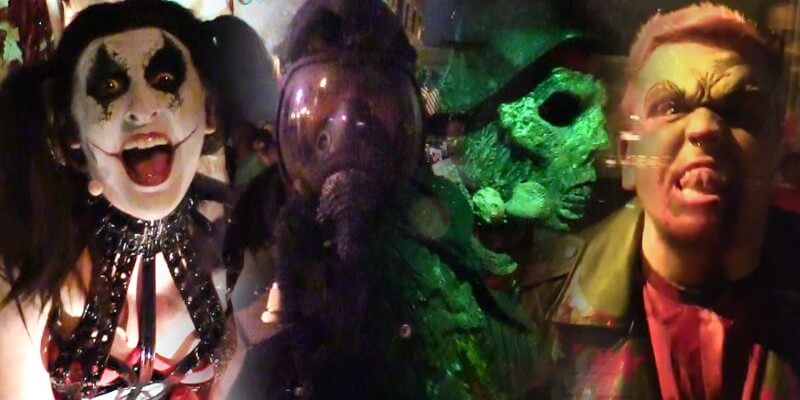 It’s truly the most wonderful time of the year!

When fans muster up the courage to dive into Universal Studios Florida for a spectacular night of scares and mayhem, it’s an experience they won’t soon forget. I had the opportunity to check out the team member preview of Halloween Horror Nights 2016 last night, and while it was a dress rehearsal for the main event, there’s no denying that the charm and the momentum of last year’s 25th anniversary has stayed intact.

While I have a few impressions for you here, look forward to Inside the Magic owner Ricky Brigante’s full review of this scare-tacular event when he attends the opening tomorrow night.

Scare Zones are wicked this year

The ‘streetmosphere’ Scare Zones return this year with a vengeance, and all of them are wildly varied from the others. Lair of the Banshees offers woodland frights with freakish mythological creatures slinking in and out of tree trunks and ancient stone structures, while Survive or Die Apocalypse embraces a sort of Purge-meets-Mad Max vibe with flaming explosions and an insanely detailed buggy that drives through the streets.

Check out videos below of the scare zones that we filmed:

The four houses I saw were fantastic

Last night, I got to check out four of the nine houses at Halloween Horror Nights, and all of them had the trademark incredible level of detail that this event is known for. The Krampus house captured the spirit of the movie wonderfully, and I especially love the Internet attacking gingerbread men sequence. Despite the fact that most of them were static, it really did a great job setting the tone.

American Horror Story was a loving tribute to three of the most popular seasons of the television show, and I can’t say that I’ve ever thought I would be stalked by Lady Gaga in a Horror Nights house. First time for everything!

Lunatics Playground 3D (the Chance house) was it twisted romp through an asylum, Chance’s insane and gory imagination, and then back to the asylum where the inmates have now overtaken the place. It’s definitely one of the event’s finest 3-D offerings in years.

Lastly, the Texas Chainsaw Massacre house has an unrivaled level of detail within. It is such a love letter to the films that I can’t even begin to describe how excited I was. I mean, I found myself clapping for Leatherface — let that sink in for a moment.

Academy of Villains: House of Fear is a must-see

Fans were a little hesitant to hear that a new third-party show was going to be constructed for the mainstage this year — and while that’s not unheard of at HHN, I think we were all spoiled by last year’s amazing production. Well, throw all of those worries out the window, because dance group Academy of Villains have brought one of the most creative and entertaining shows I’ve seen on that particular stage. The loose plot is that a bunch of asylum inmates have taken over and are letting loose in the most wild fashion (through dance and mindblowing shadow play). It’s simply unreal.

Don’t believe me? Check out the full show below:

Overall, while this particular year may not embrace the giddy rejuvenation that last year’s return of Jack the Clown had (I honestly didn’t see him anywhere), the team at Universal Orlando has still gone above and beyond to ensure that Halloween Horror Nights is the premier Halloween event on the side of the country.

Stay tuned for more from Inside the Magic when Halloween Horror Nights opens officially tomorrow!